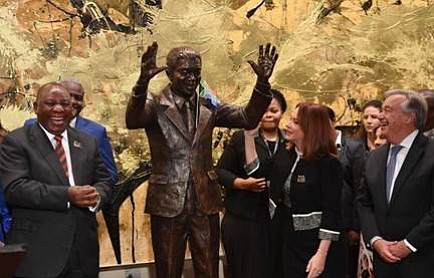 (GIN)—South African President Cyril Ramaphosa couldn’t be prouder as he unveiled a life-size statue of Nelson Mandela on the eve of the U.N. General Assembly and the opening of a daylong peace summit with nearly 160 scheduled speakers.

The statue is a gift to the United Nations from South Africa.

“The people of our country, united in their diversity, revere Nelson Mandela as the founding father of our democratic nation,” he said to a gathering of U.N. delegates, “whose life, sacrifices and extraordinary contribution to freedom continues to inspire successive generations.”

Mandela’s arms are outstretched, as if to embrace people everywhere.

The Nelson Mandela Peace Summit marks the centenary of Mandela’s birth. The years 2019-2028 will be declared the Nelson Mandela Decade of Peace, and world leaders will be asked to “redouble efforts to pursue international peace and security, development and human rights.”

This year also marks Ramaphosa’s inaugural participation in the General Assembly as head of state where he will outline South Africa’s domestic and foreign policy goals, including the long-awaited land reform program.

The original plan, including expropriation without compensation, appears to be headed for an uphill battle, with some economists saying it would violate the Constitution.

Shortly after the statue unveiling, President Donald Trump arrived in the building and made a brief appearance at a separate event on fighting the global scourge of illegal drugs.

According to the IRIN news agency, heads of delegations were told to sign a nonnegotiable text to appear at the photo-op with Trump. At least 124 agreed, but several high-profile holdouts refused, and the E.U. has drawn up its own dueling letter.

U.N. Secretary-General Antonio Guterres acknowledged the world is far from achieving Mandela’s ideals, which include human rights and global cooperation.

“Today, with human rights under growing pressure around the world, we would be well served by reflecting on the example of this outstanding man,” Guterres said. “We need to face the forces that threaten us with the wisdom, courage and fortitude that Nelson Mandela embodied.”