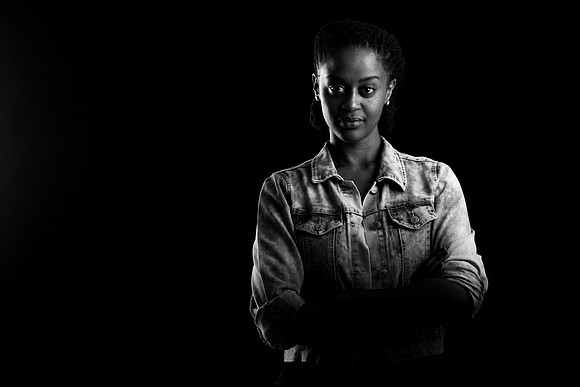 Rwandan actress Malaika Uwamahoro (pronounced Mah-Like-ah Ooh-wam-ah-har-oh) earned a scholarship to Fordham University, where she studied Theater Arts. She is presently in rehearsal for her one-woman-play “Miracle in Rwanda,” in which she plays 10 separate characters, at the Lion Theater, located at 410 West 42nd St., Theatre Row, Manhattan. The play runs from April 4 until May 11; the run of the play coincides with the 25th anniversary of the historic massacre in Rwanda.

“I am so happy to take a Rwandan story onto the New York stage. Often our stories are told by non-African people so I feel privileged as a Rwandan to be able to tell the story of Rwandan genocide survivor Immaculée Ilibagiza. The message of the play is about courage. About Immaculée’s personal empowerment of overcoming the obstacles she endured during the massacre. It is a tale about the power of faith, and the forgiveness that ultimately brought her peace of mind amid unbelievable hardship,” explained Malaika.

To understand why the play is so significant, one has to travel back in time to 1994 when members of the Hutu ethnic majority in the nation of Rwanda picked up machetes and murdered as many as 800,000 people, mostly of the Tutsi minority clan, over a period of 100 days. Some Hutus who did not agree with the genocide were also murdered as well as members of the Twa clan.

“I would have to say the trouble began with colonialism,” remarked the young thespian. “When the Belgians entered my country, they began to separate the clans by ethnicity. Until then whatever separation existed was peaceful and was done on a socioeconomic scale. The Belgians decided because we were a strong and united people to separate us via ethnicity. They issued identity cards, measured nose size, height, head size, etc., giving one clan power over another clan which started to breed jealousy and hatred.”

While there had been small skirmishes here and there before that time, the massacre began in 1994 in the capital of Kigali by Hutu nationalists and spread throughout the country. “I was born in 1990, so was very young when my family fled to the neighboring country of Uganda. Ordinary citizens were encouraged to pick up machetes and kill people who were once their friends and neighbors by the local officials and Hutu Power government. By the time the Tutsi-led Rwandese Patriotic Front gained control of the country through a military offensive, hundreds of thousands of Rwandans were dead and the plight of refugees exacerbated what had already become a humanitarian crisis. The world did not help us. It was righteous Rwandans who were disgusted by the bloodshed themselves who gained control and put a stop to the genocide,” explained the singer/spoken word actress whose family has since returned to Rwanda.

Before the massacre in Rwanda, women had few rights. But after the genocide which killed many men, women started gaining power, taking on political positions and owning property. As a social justice artist, Malaika is exposing others to the issues that have happened in her country and the situations currently taking place in Rwanda. “Presently Rwanda is doing well and bringing back the unified culture that thrived before the Belgians came. The colonials divided and separated by ethnicity. But now we no longer divide via Twa, Tutsi or Hutu. We see ourselves as one people, as simply Rwandan. We have returned to living in harmony. We all share the same language, God and culture and have gotten rid of the divisions and identity cards the Belgians forced on Rwandans,” she shared.

Malaika was recently asked to give a 10-minute talk at the Apollo alongside other women who told the stories of their countries. “I was so excited when I was asked. It was something I had dreamed about and wished for. And, to make it even better, the event at the Apollo took place during the week honoring women.”

People often wonder what gives rise to such atrocities. What would provoke friends and neighbors to turn on one another? And yet, events have shown us how easy a political campaign of hate can turn a nation against its own citizens—that even a spark of hate can rapidly grow into a firestorm if not placed in check.

For more info and for tickets to “Miracle in Rwanda,” call the Lion Theater at 212-714-2442 and visit https://miracleinrwanda.nyc.