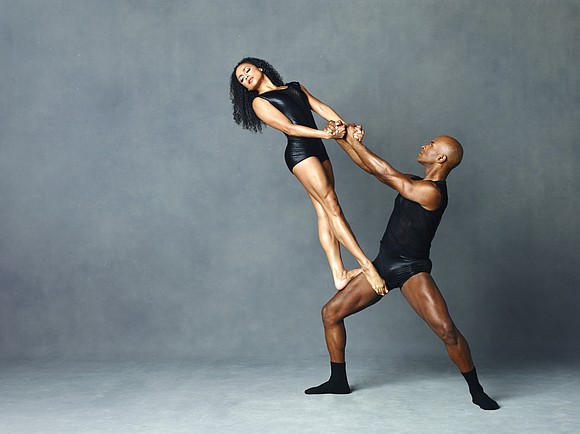 Anyone who has seen Alvin Ailey American Dance Theatre’s exquisite Linda Celeste Sims perform duets like the “Fix Me” section of “Revelations” with her husband Glenn Allen Sims can attest that there is always something magical in the air when the two dance together. Well that was particularly true during the company’s last City Center season because the pas de deux was actually a pas de trois!

Yes, the AAADT family is growing and when the happy couple sat down recently, at the company’s midtown headquarters, to talk with the Amsterdam News about the blessed event they couldn’t help but gush and glow.

“We’ve been together 21 years and we’ve been married 18,” Linda said. “I think we might have talked about having children somewhere in our early 20s. When we were starting on this career path, we looked at each other and said, ‘We’re not going to have kids, right?’ ‘Right. No kids.’” They’re quick to add that with nieces and nephews, children were always in their lives, however. But, feelings about having their own started to change a few years ago, Linda says: “I was in Barbados and I’d see a family with adorable kids and I was like, ‘Why am I staring at these children?’”

Glenn adds, “Or, we’d be sitting back reading our books and Linda would catch me with this longing look and she’d say, ‘Why are you making that face?’ I’d say, ‘What face?’ And she’d say, ‘You’re looking at everybody with babies at the airport and everywhere we go with that face.’ Then, a year from her being 40, her niece was born and one day, Linda rolls over to me and says, ‘I think I want a baby.’ I was like, ‘Really? And, everything was flashing through my head like finances, career, you know.”

Linda adds, “I felt it. And, he said, ‘Are you sure?’ I said, ‘Yes, I’m sure.’ He said to me, ‘But I thought you didn’t want…I’ve always wanted.’ I remember thinking how lucky that I’m married to a guy who didn’t pressure me. He just wanted to make sure I was ready.’” She adds that she also knew something had changed just after her father passed away. “Literally a month after he passed away, I got pregnant. I felt like, this is coming from him. He had always wanted me to have children, but he didn’t want to pressure me either. His girlfriend is the one who told me. She said, ‘You know he always spoke about you and always said how he was so proud of all your work yet he wished you had children.’ Then the next day I was like, ‘I have a feeling something is going to happen. I felt it. I felt it in my body.’”

Both Linda and Glenn note that historically, this hasn’t always been an easy decision for dancers to make. And, of course, the choice has always been disproportionately harder on women than men. But, the times, they are a ‘changing. Not too long ago, a DANCE MAGAZINE article admitted that until now, “throughout NYCB’s almost 70-year history, very few dancers have returned to the stage after having a baby.” But, the article noted, three NYCB principal dancers were “diving into motherhood while upholding their careers.” One, who was pregnant while preparing to dance “Swan Lake,” was allowed to make adjustments in her schedule because she was experiencing morning sickness. Another was able to take naps in her dressing room. Asked by an interviewer if anyone ever assumed they weren’t coming back to perform, the ballerinas didn’t skip a beat. “I think everyone here knows you are coming back,” said one. Their routines during and after pregnancy varied, but one thing was clear, a dancer’s biological clock need no longer sound like a gong. The bliss of having babies need not signal the end of a career.