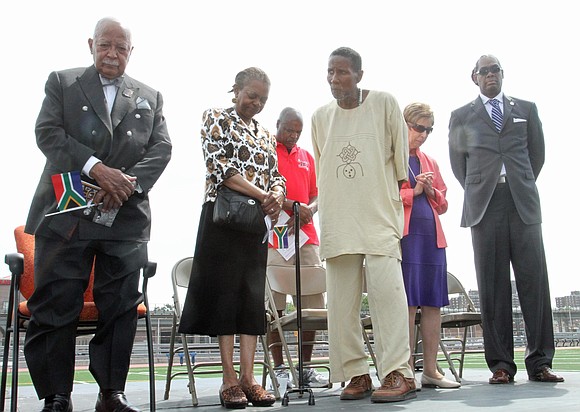 This past weekend educator and activist Stan Kinard made his transition after a long battle with cancer.

“I’m so saddened to share this news about one of our community’s gentle giants,” said April Silver of Akilaworksongs, as she announced the sad news on Saturday, April 6, 2019.

Viewing: 4-7pm on Sunday April 14 at 1 Troy Ave., Brooklyn (Woodard Funeral Home). On Monday April 15, there will be a processional at 3 pm (gathering by 2:30) from Boys and Girls High School to Bethany Baptist Church, 460 Marcus Garvey Blvd., Brooklyn. At Bethany there will be a viewing from 4pm-5:30pm. The funeral will be from 5:30pm-9:00 pm. On Tuesday April 16 is the burial will be in the morning and following the burial will be the repass at Boys & Girls High School.

The Kinard family and cultural performer Sakeenah Kinard posted: “An official statement from the Kinard Family; With an abundance of appreciation for the life and legacy of our brother, husband, and father STANLEY KINARD, the Kinard family announces today that he transitioned on Saturday, April 6, 2019.

“As a respected community leader, institution builder, youth educator, and former political candidate, Stanley Kinard is highly revered and honored by countless people within Brooklyn, New York and far beyond. The brilliant legacy of Baba Stan, as he is affectionately called, includes a long life devoted to the Orisha/Ifa African spiritual tradition.

“The family deeply appreciates everyone’s kind expressions of support and loving prayers during this time.”

The lifelong community activist became known in his later years for his Carter G. Woodson program at Boys and Girls High School.

Last year on July 18, Tulani Kinard wrote, “All the accolades and appreciation to the father of my children for the lifetime of work and impact that he leaves on every child and adult he meets…Baba Stanley Kinard. The historic Boy’s and Girls High school in Brooklyn, NY celebrated Stan on Nelson Mandela Day this afternoon. The high point of the event was the formal naming of the auditorium. This thousand-seat room (this biggest room in central Brooklyn) was named, The Baba Stan Kinard Performing Arts Center. Congratulations Baba Stan, well done!! This is a new beginning for Cultural Arts Education in central Brooklyn.”

Fellow community activist Brenda Stokely said on Facebook, “His legacy will always be cherished and much love to you all.”