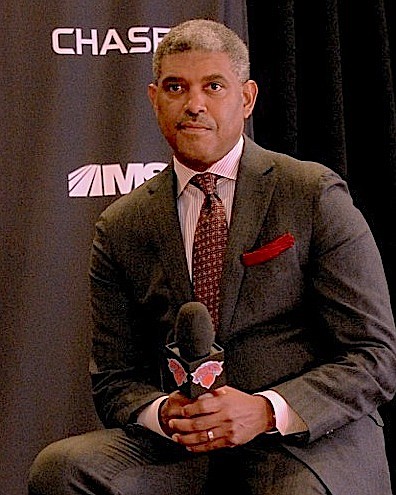 “Our main focus is the ‘18-’19 season,” said Perry. “As much as we talked about having cap space, we’re trying not to get too far ahead of ourselves. This team requires our undivided attention. I understand fans drifting to the future. Part of my job and [Knicks president Steve Mills] job is to stay grounded. We’ll deal with that class next summer when that arises.’’

The fact of the matter is Knicks fans accepted the reality of the present and began having visions of the future in December, when it became evident the team was not going to be a playoff contender or even capable of putting together a competitive season.

A losing streak of five games followed by eight consecutive defeats plummeted the Knicks to a record of 9-29 by the end of New Year’s Day. Then, one month later, Feb. 1, All-Star forward Kristaps Porzingis, who was recovering from an ACL tear, was traded to the Dallas Mavericks, signaling the conclusion of his short tenure as the centerpiece of the Knicks’ restoration.

They went into their final game of this regular season last night at Madison Square Garden against the Detroit Pistons 17-64, tied for the worst record in the franchise’s history with the 2014-15 team, which illuminates the dire state of the Knicks. Having the two most futile seasons within a five year period reflects instability and disparate philosophies if not failed execution by the organization’s leadership.

The Knicks have not made the playoffs since the 2012-2013 season under head coach Mike Woodson with Carmelo Anthony as their star. Since then they have had five coaches. Woodson for one more season, followed by Derek Fisher, Kurt Rambis for 28 games in 2016 when Fisher was fired, Jeff Hornacek and now David Fizdale.

In July 2017, Mills was promoted from general manager to president, replacing Phil Jackson and Perry was brought on board as the new GM. Mills and Perry will be under intense scrutiny over the next five months to amply upgrade the Knicks’ talent level through free-agency and the draft.

They will have cap space for two-max contracts and with good fortune the top pick in the draft having ended the NBA season at the bottom of the league’s overall standings. The lottery, which will determine the order teams draft, will be held May 14.

The fans will buy in if the plan yields positive outcomes. That remains to be seen.