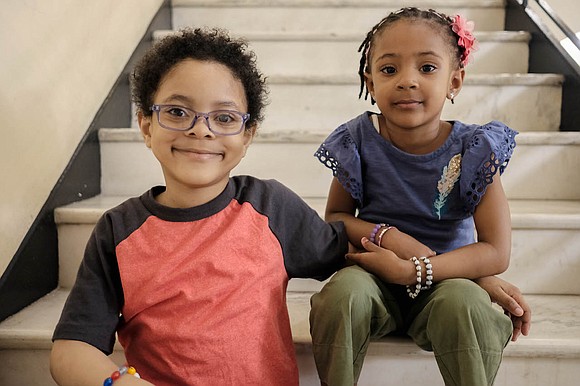 Charlene Bullock remembers the first time she knew something was wrong with her seven-year-old son, Asaya. He was a baby and she was breastfeeding him. After a few feedings, she noticed that he was red. She figured that he must be allergic to something that she was passing to him. Bullock detoxed herself, but other unexplainable rashes and symptoms continued to plague her son.

After multiple doctor visits and even flying to an immune specialist in Seattle, Washington, Asaya was diagnosed with a rare blood disorder. The cure is a bone marrow transplant. But finding a donor is not easy for African-Americans like Asaya. According to the Icla da Silva Foundation, a recruitment center for donors, there just aren’t enough African-Americans on the registry.

According to data by the National Marrow Donor Program, of the 19 million donors registered, only about 850,000 are Black, which is just 23 percent, while whites have a 77 percent chance of finding a match. Finding a donor is further complicated by the mixed heritage of African-Americans.

“My son suffers from IPEX, which is an autoimmune disease; he has serious joint pain, develops rashes on the body, stomach issues, body aches, severe memory loss, and he hurts everywhere on his bad days,” Bullock said. “But when you look at him, he is all boy, loves sports, his video games and thinks he should be on the cover of GQ.”

Asaya has been waiting for five years to find a match.

Airam da Silva, 43, president of the Icla da Silva Foundation, which is named after his sister who died at 13 because she couldn’t find a donor, said that many African-Americans do not trust doctors and that turns some away from being donors.

“There are just a lot of misconceptions about the procedures, the possible costs. And that may lead to mistrust,” he said. “My foundation is all about outreach to African-American communities and any community of color because there is a match for everyone we just have to find them.”

He wants to breakdown the misconceptions that donating your marrow is how it’s depicted in pop-culture.

“It is one of the least invasive things you can do. It’s as simple as giving blood.”

Da Silva said that if you’re on the registry, you can give someone a chance at life.

“You can just simply sign up for the registry, swab your DNA and never be a match, but it’s about having yourself in the registry because of the what if factor,” he said. “I’ve personally been on the registry for 28 years, and I haven’t been  matched to anyone, but I’m reassured that I could give someone a new lease on life.”

Asaya is currently waiting to find a donor from the Be the Match Registry, run by the National Marrow Donor program. He has lived past doctors’ assertions that he would not live to see the age of two. He is kept stable through high doses of medicine and regular doctor visits where his blood and glucose are tested.

“Doctors look at him in astonishment that he has lived to seven years of age,” Bullock said. “I tell them every time that he’s going to live, and live healthily.”

Doctors advised the Bullock’s to have another child since siblings have a higher chance of having the same genetic makeup. Within two years the Bullock’s had a little girl, but unfortunately, she was not a match. Asaya’s blood cells rejected his sister’s marrow.

“It’s heartbreaking to know that he is going through so much,” said Bullock. “What is a mother to do when her child is questioning why he has to be in this position?”

Yolanda Tate understands what a new lease on life meant for her two daughters, Madison, 25, and Olivia, 21, after they received transplants. Both her daughters were diagnosed with sickle cell from birth. They both required bone marrow transplants to cure them.

For Madison, Olivia provided the blood cord that would cure her of sickle cell, but for Olivia, she needed a donor.

“We didn’t have a long wait before a donor came forward,” said Tate. “We were told when Olivia was 11 that a donor was needed and a year later a match was made.”

Tate is grateful that the donor for Olivia took the time out to register and decide to give someone a shot at living. Her donor was Brazilian, and she also learns that she might have some heritage from Brazil.

Bullock has done her part to add more African-American names to the donor registry and has conducted drives to get the word out. She said that she knows her son’s match is out there, and she’ll campaign to give him a chance and all others.

For more information on how to be a donor visit https://join.bethematch.org/AmsterdamNews.