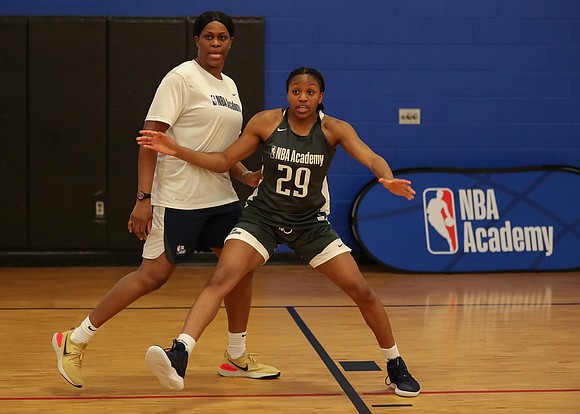 Thirty-four teenage female ballers came to Tampa, Fla., site of the NCAA Women’s Final Four, from all over the world. They were there to take part in the first-ever Women’s Next Generation program. All the players are part of the NBA Academies Women’s Program, a series of basketball development camps for top female prospects from outside the U.S.

Joined by six members of the USA Basketball Women’s Junior National Team, the players worked on skills development, attended a panel featuring WNBA greats Tamika Catchings and Ticha Penicheiro, took part in educational and life-skills sessions, competed in a round-robin tournament and got to attend the Women’s Final Four games.

Ruby Porter, 17, came all the way from Adelaide, Australia. Excited for her first-ever trip to the U.S., the 5-foot-10 guard said she’s dreamed of playing college basketball in the U.S. since she first got serious about the game.

“Knowing my friends’ experiences and seeing them develop as players and people has really inspired me to want to go to college and find the right fit for me,” said Porter. “Being invited to this camp is such an honor. The development I’ve had over the last few days has been rewarding.”

Yvonne Ejim, a 17-year-old, 6-foot forward from Calgary, Alberta, Canada, knew early on that she wanted to be a part of high level basketball. “If I really want to go somewhere with basketball and play professionally one day, going to the States will be the best choice for me,” said Ejim. “I am coming out of this a better basketball player.”

Another Aussie attending Next Generation was Shelby Rayner, 18, a 5-foot-4 guard from Tasmania. This trip was her first time outside of Australia. “I’ve learned new skills. Everyone is good and it’s a great experience to play against some of the best players,” said Rayner.

The global technical director for the women’s program is Jennifer Azzi, a former WNBA player and member of the Women’s Basketball Hall of Fame who spent six years coaching at the University of San Francisco. Coaching this highly motivated group of international players has been inspiring.

“They’re excited, they’re appreciative of being coached and they’re good,” said Azzi. “As we’ve gone and worked in the different regions—namely India, Africa, China, Latin America—a lot of them had no idea what the opportunities were here. Once the lightbulb goes on, it’s amazing to see the improvement.”

She added, “Every player that’s here could go to college. They’re all good enough for Division I.”