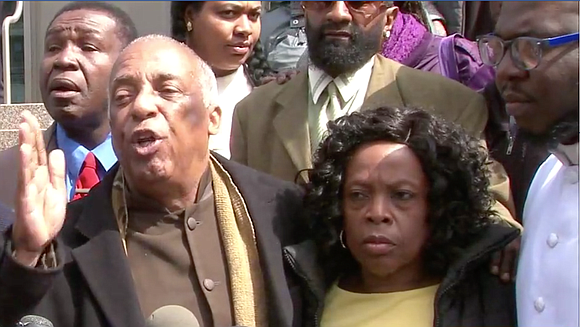 “My son is not a murderer,” Veta Lewis told the Amsterdam News. “He didn’t get a fair trial. He was railroaded by the police, the prosecution and the judge.”

While awaiting the sentencing Karina Vetrano’s parents said with the conviction they had justice. Now Chanel Lewis might have a second chance for the same.

Lewis’ sentencing Wednesday was postponed until next week due to allegations of potential juror misconduct. The court will hold a hearing on the allegations on Monday, April 22. Prosecutors agreed that the hearing should go forward.

“A killer is still on the loose,” proclaimed Brooklyn Assemblyman Charles Barron. “Chanel is innocent.”

Earlier this month, jurors found Lewis guilty of all counts in the murder of Vetrano.

When the AmNews contacted The Legal Aid Society and the Queens County district attorney both offices declined to comment.

Days before Lewis’ conviction lawyers from The Legal Aid Society said they received an anonymous three-page letter alleging the New York Police Department conducted a “racialized” search after a DNA phenotype test showed material collected from the crime scene belonged to a Black male. Then Chief of Detectives Robert Boyce used that fact to take the DNA of all Black men arrested in Queens and Brooklyn and swab anyone who had been arrested in Howard Beach. This led to more than 360 Black men being swabbed for DNA.

As a result, Lewis’ defense tried to submit a motion seeking a hearing to address the prosecution’s failure to disclose this evidence and a motion to re-open the pre-trial suppression hearing but were denied by Judge Michael B. Aloise.

Lewis’ defense also noted that the police held Lewis captive for 12 hours before he “confessed” to the crime—twice changing the details each time. The confessions were videotaped, the jury asked to see them, but they didn’t end up viewing them. They were told there was a technical problem with the audio/visual equipment in the courtroom.

Lewis allegedly matched the DNA found on Vetrano. Experts have questioned whether or not it was conclusive.

On Aug. 2, 2016, 22-year-old Lewis was accused of sexually assaulting and strangling Vetrano as she jogged near her Howard Beach, Brooklyn home. Hours after the assault, Phil Vetrano—Karina’s father—found her body in Spring Creek Park with her teeth broken.

Lewis’ first trial in November ended with a hung jury. Lewis was found guilty on 16 counts after five hours of jury deliberation; he faces up to life in prison without the possibility of parole.

After months of no progress in the investigation, NYPD Lt. and Howard Beach resident John Russo testified in court that he spotted a young Black man in the neighborhood two months before the murder, tailed him for suspicious activity and called 911 leading to a stop-and-frisk. Lewis, from East New York, told the officers he was looking for a place to eat and was driven to a McDonald’s in the Rockaways.

Cheers and applause from Vetrano family and supporters filled the courtroom when the verdict was read that Chanel Lewis was guilty of the murder of Karina Vetrano. But the doubts and controversy continued.

Lawyers for The Legal Aid Society, who represented Lewis, said they’ll file an appeal, but not before verbally blasting the decision made by the jury and the process of the trial.

“We wholeheartedly disagree with Judge Aloise’s precipitous rejection of our request for a hearing to investigate potential Brady violations by the New York City Police Department and the Queens County district attorney’s office that could have well changed the outcome of the case,” read The Legal Aid Society’s statement to the AmNews. “Exculpatory information was reported and confirmed that was never revealed to the defense and that could have exonerated Mr. Lewis, yet the court declined even to allow exploration of the issue. This is a complete miscarriage of justice. Judge Aloise also kept jurors for well over 12 hours—an unprecedented action—to extract a verdict. Our client did not receive a fair trial.”

A juror told the press that they felt pressured to convict Lewis, but never cited why.

“This was a horrifying case,” said Ryan in a statement. “A vibrant, young woman’s life came to an abrupt and violent end. Ms. Vetrano’s death was brutal.”

Police initially told reporters that based on Russo’s tip they had obtained a 911 call from the day after the murder which called Lewis out by name and said he was walking around the neighborhood with a crowbar.

“There’s a killer still lurking out there,” said Barron. “I think that confession was coerced and DNA evidence can always be challenged based on the process of how they collected it. I will continue to support the family and I hope the lawyers appeal. He could’ve been framed. The Black community should be outraged.”

As for Vetrano’s parents, Phil told the media as he walked out of the courtroom, “Justice has been served.”

“Based on public information alone, there are too many questionable actions and inconsistencies to be comfortable with the conviction of Chanel Lewis,” retired detective Marquez Claxton told the AmNews. The director of the Black Law Enforcement Alliance added, “I fear that we are accepting a miscarriage of justice in order to provide well deserved closure. The police interrogation, the manufactured and crafted pseudo-confession, the questionable retrieval and securing of a DNA sample, the happenstance identification of Chanel as a viable suspect by an off duty police officer and the miraculous discovery of the deceased victim by her father which precluded an unadulterated forensic examination of the crime scene, all scream reasonable doubt. This conviction is troubling and has the feel of a travesty. There must be an independent review of this prosecution to avoid another historic conviction error or even the appearance of impropriety.”

The Amsterdam News asked Chanel Lewis’ mother if she had asked her son if he was in any way involved in the death of Vetrano.

“I asked him and he said ‘Mommy I would never kill this young lady. I don’t know what they are talking about.’”

Mrs. Lewis added, “Someone destroyed her life, but I know it was not my son. I give my condolences. I see the mother in courtroom so I feel their pain, but at the same time my son did not kill their daughter.”

“The NYPD should continue its search for a killer,” Michael Thomas, a retired law enforcement officer and criminal justice activist told the Amsterdam News. “Black men don’t let the police swab you for DNA that they can plant anywhere. You could be the next Chanel. The DNA does not prove anything and the confession was coerced, just like the Central Park Five. Chanel is innocent.

“We got a postponement,” said Thomas. “A lot of the jury said they felt pressured. They said if they had known about the anonymous letter they wouldn’t have made the decision that they did. They asked for a play back of Chanel’s ‘confession,’ but all of a sudden they’ve got technical difficulties.”

“It is very hard on the family,” Mrs. Lewis concluded. “My son is hanging in there, but he has never been away from his family for so long. So it is very hard coping with this situation.”

Mrs. Lewis said that the family are hoping that Monday’s hearing may lead the court to “vacate the verdict, turn it around in the name of Jesus, because he did not have a fair trial.”

“My son doesn’t even know who this young lady is. The police were telling him about her,” Mrs. Lewis said, “They promised him probation to put him in this position, they told him that he could go home.”

In the meanwhile, Mrs. Lewis says that on Monday at Queens Criminal Court, the community should “Come out and support and pray for us. I am a child of god, and so is my son. I sometimes have sleepless nights, our life has changed and can never be the same because a part of me is missing.

“My son is not capable of this.”