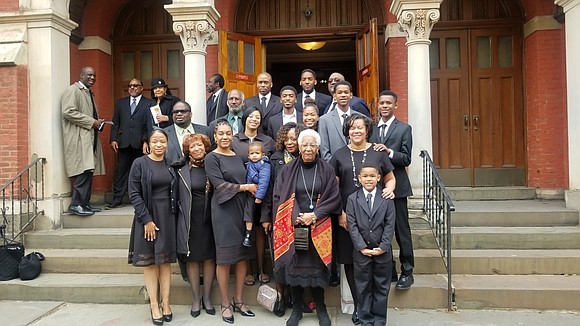 The homegoing services for Coach Douglas Terry Muhammad were held on Thursday, April 11, at Brown Memorial Baptist Church in Brooklyn.

Family and friends joined former students, athletes and award-winning track runners who heaped praise and love on the beloved man known as “Coach.”

But tear-and-laughter-filled testimonies told of a family man who was not just a dedicated teacher, but a journalist, entrepreneur, community builder and activist.

The Rev. Clinton Miller delivered an inspirational eulogy encouraging folks to take up the mantle of repairing, embracing and working for the community betterment. Family members told warm stories, as did former student athletes, who were speaking loving words decades after they hit that track with their sharp and dedicated coach.

Praising the family man who became a member of the Fruit Of Islam in 2001 and worked tirelessly at Harlem’s Muhammad Mosque No. 7, the Nation of Islam sent FOI members, and Sister Virginia Muhammad, Minister Abdul Hafeez Muhammad and Minister Henry Muhammad brought words of wisdom and comfort to the family.