Famed ’50s group The Chantels fêted in the Bronx 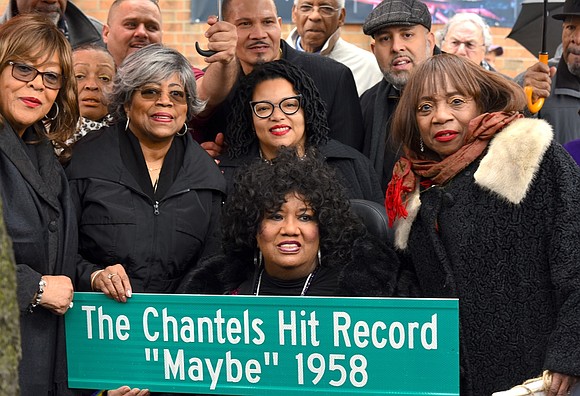 On April 5, famed ’50s female group The Chantels received a commemorative street sign at the corner of West 166th Street and Prospect Avenue, in the Bronx, in front of St. Anthony of Padua’s Church where the group began. The group also celebrated their 60th anniversary in the music industry, and were honored with a reading of a proclamation proclaiming April 5th as “The Chantels Day” in the Bronx.

Organized by Beverly Lindsay-Johnson of Kendall Research and Entertainment, Clyde Frazier Sr. of the Frederick Samuel Foundation of NYC and musical director Hal Keshner, The Chantels’ street sign unveiling was followed by a musical program at St. Anthony of Padua’s auditorium which concluded with the Chantels performing some of their hit song “Maybe.”