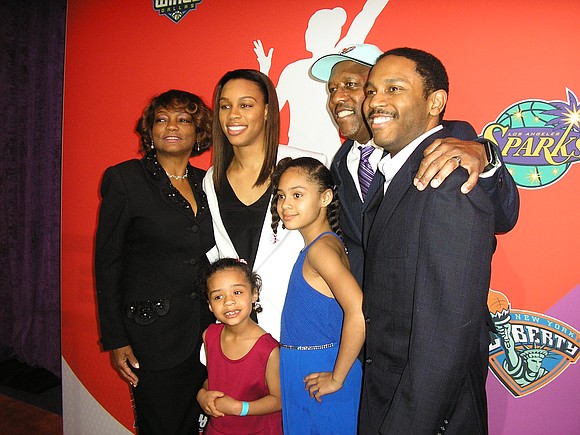 Moments after hearing her name called as the second pick of the 2019 WNBA Draft, guard Asia Durr of the University of Louisville shared a distinct connection to her new home. “My mother is from the Bronx,” said Durr, the New York Liberty’s top pick.

“I’m thankful to my family, my friends, everybody who helped me get here,” said Durr. “I have a lot of family up here and I know my mom’s very happy about it and proud of me getting drafted.”

Durr’s mother, Audrey Durr, who moved to the South as a teenager, is ready to spend time in NYC during WNBA season seeing her daughter play and visiting her many relatives. “Asia’s worked so hard since she was a little girl,” she said. “She just wanted it. She was driven. She always worked ahead with her schoolwork so she could go outside and work on her game.”

In the second round, the Liberty picked Han Xu, the first NBA Academy participant to be drafted into the WNBA. The 6-foot-9 center from China was overcome with emotion. “I feel very blessed,” said Xu.

Players from Christ the King High School in Queens, from which WNBA stars Sue Bird and Tina Charles graduated, attended the panel discussion and hung around to watch the draft unfold. “It’s great to see how hard work transitions to the next level and to see everybody’s dreams come true,” said senior forward Klarke Sconiers. “It’s definitely personally motivated me to work harder and make sure my name is called.”

In the third round the Liberty selected Megan Huff of the University of Utah. She watched the draft on campus with friends, teammates, coaches and her mother. In the spirit of the day, Huff bought a new outfit and had her makeup done. Training camp will be her first trip to New York.

“I’m excited to compete at the next level,” said Huff. “I know every day going in is going to be a challenge and I’m going to have to work for a spot.”

Second-year Liberty guard Kia Nurse participated in the Importance of Sport for Her panel. “These girls were eager to hear what we did to get where we are, ask questions and be engaged, and I love that,” said Nurse.

She is looking forward to the Liberty season. Training camp kicks off in a few weeks, and the team will play its preseason game at the Barclays Center. “I love coming back to New York because the fans are great,” said Nurse, who played in Australia during the off-season. “I’m excited to see how it goes.”