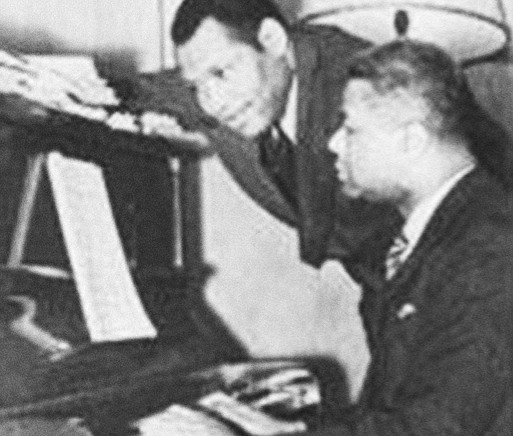 Lawrence Brown at the piano with Paul Robeson looking on

The open-air plaza features eight black granite panels detailing the story of Robeson’s life and stands in a prominent location next to the Voorhees Mall on the College Avenue campus at Rutgers–New Brunswick. Hundreds of students, alumni and community members attended the unveiling.

Robeson’s granddaughter, Susan, attended the unveiling and said the plaza showcases Paul’s commitment to helping others even with his success and fame.

“My grandfather often said, ‘I’m not free until we’re all free,’ and he wasn’t just talking about Black folks,” she said. “He was talking about every single person who walks on the planet Earth.”

A 1919 graduate from Rutgers University, Robeson attended the school on an academic scholarship becoming the university’s third African-American student. He soon became a star scholar with a consistently high grade-point average.

In his junior year he became one of only four classmates admitted to Phi Beta Kappa and, in his senior year, was one of four men chosen to join the Cap and Skull Honor Society. He was the valedictorian of his graduating class.

Robeson also excelled as a Rutgers athlete. He was the university’s first Black football player and was named an All-American in 1917 and 1918. He won 15 varsity letters in football, baseball, basketball and track.