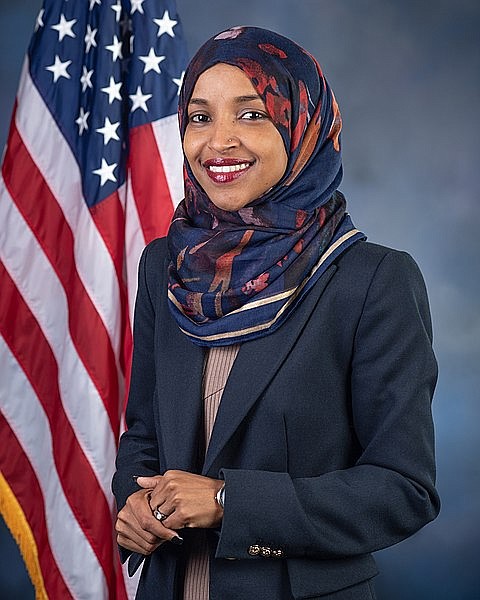 Rep. Ilhan Omar is a Muslim, a woman, a refugee and an outspoken critic who speaks truth to power and thus is a perfect foil for attacks and insults from Trump. She became an even bigger target recently after Trump posted video footage of 9/11 suggesting she was downplaying the terrorist attacks.

What appears to be nothing more than Trump’s ongoing denunciation of women, Muslims, immigrants and anyone opposed to him is a more obvious appeal to his base, using tactics and policies that propelled him into the Oval Office.

The confrontation with Omar has blown into death threats against her. “Since the president’s tweet Friday evening, I have experienced an increase in direct threats on my life—many directly referencing or replying to the president’s video,” she said in a statement Sunday night.

“Violent rhetoric and all forms of hate speech have no place in our society, much less from our country’s Commander in Chief,” Omar added. “We are all Americans. This is endangering lives. It has to stop.”

White House press secretary Sarah Sanders intensified the rebuke of Omar, 37, a Somali American who came to this country as a teenager and became one of the first Muslim women to serve in Congress (Rashida Tlaib, a Democrat from Michigan,the other). “I find her comments to be absolutely disgraceful and unbefitting of a member of Congress,” Sanders said, “and I think that it’s a good thing the president is calling her out.”

Trump needs no incident to assail Muslims, and Omar certainly stoked his rage with her speech before the Council on American-Islamic Relations where she discussed the founding of CAIR, which she wrongly said was founded after 9/11 (it was founded in 1994) and said they “recognized that some people did something and that all of us were starting to lose access to our civil liberties.” Trump and his team lifted these words and cast them against the 9/11 video to make their point.

Several Democrats took exception to Trump’s misrepresentation of Omar’s comments, citing it as willful and

dangerous racist bullying. When the New York Post published a front page story with a photo of the World Trade Center in flames and with Omar’s quote attached, it further incensed Tlaib who said, “Enough is enough. No more silence, with NY Post and now Trump taking Ilhan’s words out of context to incite violence toward her, it’s time for more Democrats to speak up. Clearly the GOP is fine with this shameful stunt, but we cannot stand by.”

Sens. Bernie Sanders, Elizabeth Warren and Jerrold Nadler certainly are not standing by or holding their tongues. Sanders said Trump’s attack was “disgusting and dangerous” and that Omar would not “back down to Trump’s racism and hate, and neither will we.”

Warren said, “The president is inciting violence against a sitting congresswoman—and an entire group of Americans based on their religion. It’s disgusting. It’s shameful. And any elected leader who refuses to condemn it shares responsibility for it.”

Nadler said that Trump spoke out of turn and is in no position to take the moral high ground when it comes to 9/11 because he “stole $150,000 from some small business person who could have used it to help rehabilitate himself.” Nadler, who chairs the House Judiciary Committee and is poised to put Trump’s feet to the fire, was referring to funds set aside for businesses damaged by the terrorist attacks.