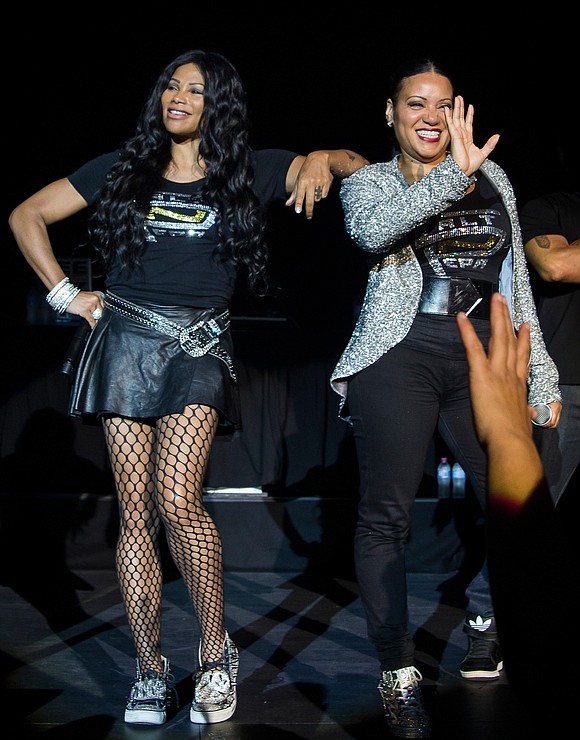 Givin’ a little bit of heart and soul

As we do it to you in your earhole

You can’t survive, let alone thrive 30 plus years in an industry as fickle and cutthroat as the music business without heart and soul in abundance and your circle must remain for the most part sucker-free. Actually thrive is an understatement if you look at the totality of a career that includes a Grammy award and over 15 million units sold globally, and is once more gaining traction, then the terms legendary and iconic fit Salt-N-Pepa like spandex. Carrying the ball for foremother acts like The Mercedes Ladies, Sequence and Us Girls the group added another first to their resume as they became the first hip-hop artist with a residency in Las Vegas. An accomplishment the group holds in high regards. An animated Pepa says, “Back when we started out it was a question of whether hip-hop would last. Now we’re here 30 years later representing hip-hop in Vegas. Dammmnnnn—it can’t get realer then that.” Salt chimes in, “Las Vegas was once thought of a place to go where you went when your career was dying; now it’s a place to go when you’re doing really well.” Currently on a hiatus from the Las Vegas run, the group has other ventures in immediate sight.

Next up is a project that they share with a group that is also seen as musical monarchs: Cheryl “Coko” Gamble, Tamara “Taj” Johnson and  Leanne “Lelee” Lyons collectively known as SWV! Since their debut in 1992, the music of Sisters With Voices has remained staples in the playlist of fans of classic R&B the world over. Plaudits such as multiple American Music Awards, Billboard and Grammys nominations with an additional 25 million units moved, not many can match the unadulterated love they received from their fan base.

Beginning Tuesday, April 30 at 10 p.m. ET/PT on BET and BET HER, the two mainstay groups can be seen holding court with the BET premiere of “LADIES NIGHT.”

The show chronicles life on the road as the collectives launch the “Ladies Night” national tour. We’re privy to the individual personalities, group egos, personal conflicts and professional obligations which all take center stage to discover whether or not the ladies can push it to greatness together or get weak and succumb to the pressure. Salt adds a little more flavor as she states, “In our entire career, we’ve never been on tour with a female group so this is a first. You’ll see us being vulnerable and bosses. You’ll see the similarities of things that go on within both groups and it’ll show the challenge it takes to stay together, but also the rewards that are in the sacrifices if you really want it.”

Follow the program on Twitter @BET, and be part of the conversation about the series using the hashtag #LadiesNightBET.