It's Not Over: Court sentences Lewis to life with no parole for Vetrano’s death 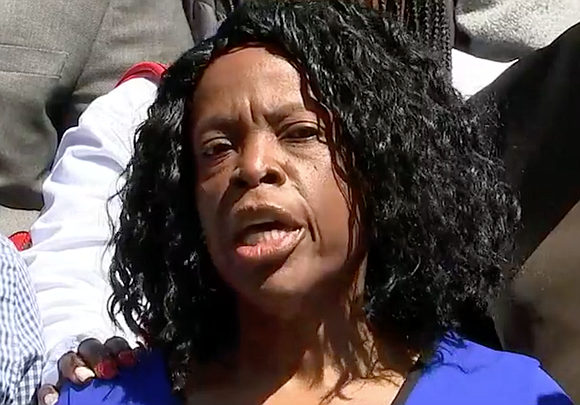 “I’m innocent,” said Chanel Lewis to those in the courtroom. “I’m sorry for the family’s loss, but I didn’t do this.”

To hear the prosecution tell it, Lewis’ plea doesn’t matter now as he was sentenced to life in prison without the possibility of parole for the rape and murder of Karina Vetrano.

“Chanel Lewis is innocent,” declared New York State Assemblyman Charles Barron. “He is the victim of a racist judge, a flawed prosecution and persecution, and a New York City police department blaming a Black man—any Black man…for this heinous crime. The record will show that initially they were looking for a white man.”

He continued, “This case must be overturned on appeal. It is not over.”

Despite being found guilty, Lewis’ sentencing was set for last week but was postponed amid allegations of jury misconduct. Juror Christopher Gooley said that he was intimidated into ruling Lewis guilty, but Judge Michael Aloise moved forward with the sentencing on Tuesday. Lewis was found guilty on 16 counts after five hours of jury deliberation.

A previous trial against Lewis ended in a mistrial.

The Legal Aid Society, who represented Lewis in the trial, sent a statement labeling the judgement an injustice and vowed to continue to fight for their client.

“While there is no denying that Karina Vetrano’s death is tragic and that her family and friends suffered a great loss, every aspect of this case—from the police investigation to jury deliberations—was propelled by a desire to convict at all costs,” read their statement. “This was done without any concern for Mr. Lewis’s constitutional rights to due process and a fair trial.”

Veta Lewis said that she spoke to her son the previous night, and said he was “hanging in there. He just says, ‘Mummy, I’m alright.’ He knows I worry, so he tries to keep my spirits up. That’s the kind of son I have.

“I feel that we have a great chance to get an automatic appeal, because in the court house the judge denied every motion from the defense. He favored the prosecution. He was biased. He’s a racist, and he did not give my son a fair trial.

“My heart goes out to the Vetrano family, but the judge sentenced an innocent man to life.”

On Aug. 2, 2016, 22-year-old Lewis allegedly sexually assaulted and strangled Vetrano as she jogged near her Howard Beach home. Hours after the assault, Phil Vetrano, Karina’s father, found her body in Spring Creek Park with her teeth broken.

The ensuing months brought no progress to the investigation until NYPD Lt. and Howard Beach resident John Russo testified in court that he spotted a young Black man in the neighborhood two months before the murder, tailed him for suspicious activity and called 911, which led to a stop-and-frisk. Lewis, an East New York resident, told the officers he was looking for a place to eat and was driven to a McDonald’s in the Rockaways.

A few days before Lewis’ conviction Legal Aid Society representatives received an anonymous letter accusing the NYPD of conducting a “racialized” search after DNA collected at the crime scene showed it belonged to a Black male. The Chief of Detectives at the time, Robert Boyce, ordered the DNA of all Black men arrested in Queens and Brooklyn and the swabbing of anyone who had been arrested in Howard Beach.

More than 360 Black men were swabbed for DNA.

Barron, and others such as activists the Revs. Kevin McCall and Kirsten Foy, are not convinced by the Lewis confession, which Barron calls “coerced,” or the DNA collection.

Barron asserted, “The DNA we believe was planted by the police because they needed a Black suspect. There have been many cases where DNA evidence and confessions were used against individuals who were later found innocent.

“Black men beware of the NYPD taking your DNA—don’t drink water or eat anything in the precinct—because you could be the next Chanel Lewis. Howard Beach is not safe for Black people. We remember the 1986 Michael Griffith case where that 23-year-old Black man was chased to his death on the Belt Parkway by a group of white racists, and we are aware of the NYPD new Black DNA stash. In fact the area is not even safe for white people anymore either because there is a killer on the loose.”

Barron, who was called by the family and attended several days of both trials, said, “This case should be automatically appealed. The judge was arrogant, is racist and incompetent and his ruling should be overturned like so many of his other decisions. Anytime you have a white juror saying he was pressured into giving a guilty plea against his wishes, you have to look at it. There were nine white jurors. Chanel was not tried by a jury of his peers. His lawyers will appeal this case and our fight for justice for Chanel will continue. Chanel Lewis is innocent!”

Judge Aloise has a history of having rulings overturned. According to an investigation by City Limits, since Aloise became a Queens Supreme Court-Criminal judge in 2004, he’s had 42 cases reversed or modified by the appellate division with some reaching the New York State Court of Appeals. Aloise has made erroneous rulings in favor of the prosecution numerous times. He’s also had questioned everything from his rulings on the legality of the initial arrest to what constitutes as admissible evidence and jury instructions and sentencing.

“We will appeal this case to the Appellate Division to secure Mr. Lewis the justice that he deserves,” said Legal Aid Society in their statement.

Citing the work of the Innocence Project, Lewis said that the advocacy group has even helped free people “who had been in prison for 40 odd years.”

Lewis’ mother said that she and her husband had raised their children here, and with ministers and evangelists all up and through their family. She said she wanted “the community to pray for me and my son for God to turn this whole case for my son. My son is not a rapist. He is not a murderer. He did not kill Karina Vetrano. The police set this in motion. The judge and the prosecution walked all over the defense attorney. The justice system failed us.”

Lewis added, “I want the world to know that the killer is still out there.”