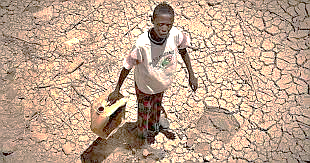 Water has no enemy.

That’s the theme of a popular song by famed Nigerian singer and activist Fela Anikulapo Kuti who reminds us just how vital water is. If you’re going to wash, he sings, it’s water you’re going to use. If you want to cook soup, cool off in hot weather, give to your children—“na water you go use.”

In a recent dispute, he recalled, fast friends became bitter enemies when Ethiopia announced it was building a dam on the Blue Nile which supplies 85 percent of the waters of the Nile River, the “father of African rivers” and a critical water source for Egypt.

Ethiopia’s proposed Project X—renamed the Grand Renaissance Dam—is a massive hydroelectric power station with one of the world’s largest dams. That angers Egypt, which relies heavily on the Nile. Its waters run to the fields and fill Egypt’s reservoirs. They have demanded that Ethiopia cease construction. Some neighbors even discussed methods to sabotage it.

The dam is projected to be operational by December 2020.

As Egypt and Ethiopia settle their differences, red flags are going up in Uganda, Zimbabwe and other parts of the center and south where rains have been delayed and drought has stretched beyond March.

Ugandan Agriculture Minister Christopher Kibanzanga has warned of impending famine in most parts of the country, cautioning traders to start food rationing. In Zimbabwe, water levels in national dams have fallen to 69 percent.

Drought is also predicted for Kenya, Somalia and Somaliland.

Meanwhile, Mozambique may be getting some relief with a loan offer from the International Monetary Fund of $118.2 million for reconstruction needs after Cyclone Idai which caused significant loss of life and infrastructure damage.

In a tweet to mark Earth Day, U.N. chief António Guterres said it was vital “every day” to “commit to taking better care of our planet. Please do everything in your power to tackle climate change—the defining issue of our time,” he said.