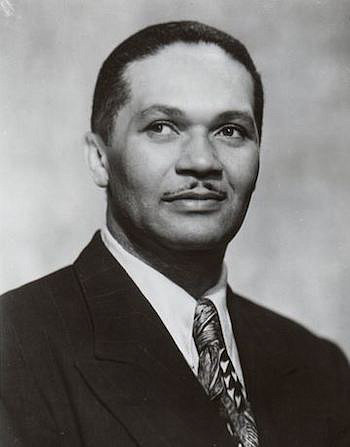 If Anne Brown has appeared, can Todd Duncan be far behind? Certainly not in this column that featured her last week. She was the original “Bess” and Duncan was the original “Porgy,” whose names combined represent the musical composed by George Gershwin based on a book by Du Bose Heyward.

Brown and Duncan rose to national acclaim in the premier production of “Porgy and Bess” in 1935. Duncan was 32, having been born Robert Todd Duncan on Feb. 12, 1903, in Danville, Kentucky. His father, John, was a garage owner and his mother, Lettie (Cooper), was a music teacher, and undoubtedly gave her son his first piano and music lessons.

But it was later at Butler University in Indianapolis that Duncan earned his bachelor degree in music and his master’s degree in arts from Columbia University Teachers College.

A year before his historic breakthrough, in 1934, he debuted in Pietro Mascagni’s “Cavalleria rusticana” at the Mecca Temple in New York with the Aeolian Opera, a Black opera company. When he was chosen to portray Porgy, Gershwin personally selected him for the role, one that he performed more than 1,800 times. Like Brown, Duncan was obstinate about performing at venues that discriminated against people of color, and he was the ringleader when the cast protested the National Theatre’s segregation policy in the nation’s capital. He stated that he “would never play in a theater which barred him from purchasing tickets to certain seats because of his race.”

As was noted in the profile of Brown, the theater capitulated and permitted the first integrated performance at the landmark theater. Duncan was also the first performer for the role of Stephen Kumalo in Kurt Weill’s “Lost in the Stars.”

In 1938, he appeared on the London stage at the Theatre Royal, Drury Lane in C.B. Cochran’s musical production “The Sun Never Sets.” Among the noted performers in the production were Adelaide Hall and Edna Best. Stewart Granger, later to establish himself as a leading matinee idol, was also in the cast. The musical was adapted by Pat Wallace and Guy Bolton from various stories written by Edgar Wallace. Cole Porter composed the original music. “River God” is the only memorable song from the musical.

After the London run closed, Duncan and Hall toured Britain with the production. Two years later, he was ensconced at Howard University where he taught voice for the next 15 years, and among his students was vocalist Philip Booth. Even with a teaching load, he continued performing as a soloist, often accompanied by pianists William Duncan Allen and George Malloy. In this capacity, he racked up more than 2,000 performances in more than 50 countries as well as two film roles.

In 1945, he retired from Howard and opened his own voice studio and taught a number of students, intermittently continuing a string of recitals. This same year he became the first African-American to sing with a major opera company, and the first Black person to sing with an otherwise white cast as Tonio in Leoncavallo’s “Pagliacci” with the New York City Opera. Later, the same year, he sang the role of Escamillo, the matador, in Bizet’s “Carmen.” Ten years later, in 1955, he was the first to record the ever popular “Unchained Melody,” composed by Alex North with lyrics by Hy Zaret.

The song was part of the soundtrack for the film “Unchained,” in which Duncan had a cameo appearance. Several singers recorded versions of the song, perhaps none more successfully than the one by Al Hibbler. In 1978, Duncan was the recipient of a major birthday salute by the Washington Performing Arts Society.

Among the awards he amassed was the George Peabody Medal of Music from the Peabody Conservatory of Music in 1984. Other awards included an honor from Haiti and one from the NAACP, the New York Drama Critics’ Award for his performance in “Lost in the Stars,” and honorary doctorates from Valparaiso and Butler University. He was also a member of the Alpha Phi Alpha fraternity.

Throughout his illustrious career, Duncan always relished opportunities to sing spirituals and spoke fondly of them in one of his final interviews. “Spirituals are so deep inside of me, it’s difficult for me to find words that are meaningful. Spirituals are a part of whatever I am. When I sing them my being sings them, not my throat…it is very difficult for me to put in words something that is at the bottom of my very being.”

And there are splendid recordings of his versions of “Swing Low, Sweet Chariot,” and “Nobody Knows the Trouble I’ve Seen.”

Duncan died of a heart ailment at his home in Washington, D.C., Feb. 28, 1998, leaving to mourn his passing his wife, Gladys Jackson Duncan, and his adopted son, Charles, a successful attorney.