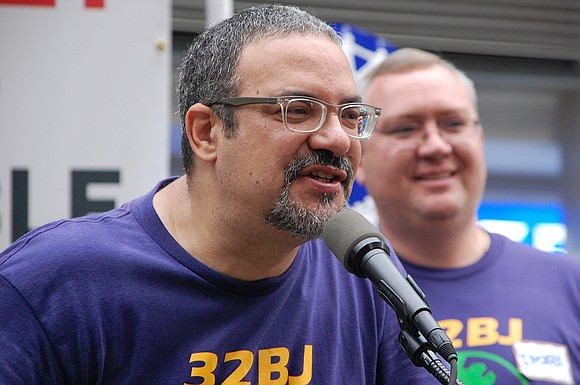 Friends, family, colleagues and elected officials showed up on a late July afternoon to mourn Figueroa’s loss and simultaneously celebrate his work in shaping the union into the force it is today. Newly-elected 32BJ President Kyle Bragg praised Figueroa’s disposition not only as a labor activist, but as a man.

“We also learned that at his core, Héctor was a family man, a loving father and caring husband who brought that love and care to our union because he knew that if we were going to build a union worth fighting for, it would have to be rooted in what makes life worth living: so we built a union centered around the idea that to succeed we would love and protect each other, we would encourage each other, we would respect each other, we would give everyone the opportunity to lead,” stated Bragg.

“We’ll continue fighting for what’s good and decent and right in this world with the same love, kindness and compassion that you showed everyone,” continued Bragg.

Figueroa’s passing was felt in many corners of the tri-state area. The New York Times released a posthumous op-ed from Figueroa titled “The Labor Movement Can Rise Again” where he detailed what he saw as the future of the labor movement.

“It’s not too late to rebuild our movement,” wrote Figueroa. “If labor wants to have a real impact, our movement needs a big and ambitious plan to organize. It is heartbreaking to witness our movement risk near-irrelevance when workers are ready to take action.”

SEIU President Mary Kay Henry touted her famous debates with Figueroa and how even when they disagreed, they did so from a place of respect. She said that he had a moral compass that didn’t budge.

“Héctor believed that we had to be bold and ambitious, and he called on us to take big risks,” stated Henry. “He knew real power came from when we joined together and treated the discarded stones of this economy to become the cornerstones of a just society.”

While Figueroa was president, 32BJ grew by over 50,000 members and helped get dozens of local and state policies protecting and lifting working families passed in various states. Most recently, he appealed to the state government in favor of the farmworkers’ rights bill, automatic voter registration and prevailing wage bills for building service workers.

“He touched every corner of this city,” stated de Blasio. “His impact was felt all over this nation. I offer my personal condolences but I also offer my condolences to 8.6 million New Yorkers because the city became a better place the moment Héctor became a leader here, the moment we felt his passion, his belief.”

Workers on the ground have felt Figueroa’s death in a unique way. Shantel Walker, who works at a Papa John’s in Brooklyn, worked with Figueroa since 32BJ joined and supported the Fight for $15 movement. Walker found out about Figueroa’s death from her mother. She said she was just thinking about calling him when she got the news.

Walker said she lost a friend and a leader.

“I feel like I just lost someone in my own family,” Walker stated. “This hurts. Héctor is a great man but he made you feel like you are on the same level as him. I will miss him.”