Taste the Caribbean: frozen treats with a Trinidadian twist 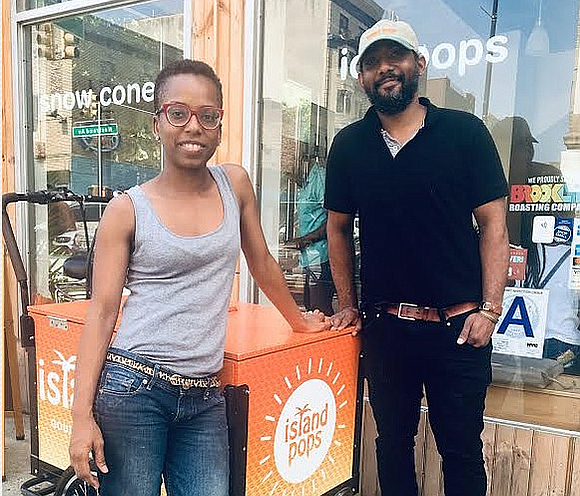 For thousands of years ice-cream was reserved for the white and rich. Many had to settle for flavored snow. Fast-forward to today, ice cream is for everyone, no matter what class or race. As its consumers have multiplied, so have its flavors.

Trinidadian couple Shelly Marshall and Khalid Hamid are sharing some of these flavors through their Trini inspired ice cream shop, Island Pops. The couple specializes in ice pops and ice cream which highlight flavors from their country of origin, Trinidad. Their most popular being the white creamy soursop ice cream and pink sorbet made from sorrel flowers.

Although owning an ice-cream shop was not part of their initial plan, Marshall and Hamid have found joy in doing it. “What happened was that I had gotten sick with chikungunya from a mosquito bite,” shared Marshall. “After about two weeks of fever and body pains, I was craving soursop ice cream. My husband tried to make it, and it did not come out good.” There was no place where they could find homemade soursop ice-cream, or any other West Indian flavors that were up to standard, thus realizing that they had a niche. “I then did the ice cream course at Penn State University and taught my husband how to make it.”

Khalid was acquainted with some West Indies party promoters which proved useful in Marshall and Khalid gaining new customers. “We made popsicles which we had available during parties and events. It was a way for us to get our name into the West Indian community. Eventually, people started noticing us and taking orders, and we gained a huge following.”

Having been bootstrappers, using their own savings, what gave the couple a boost was winning the PowerUP business plan writing competition at the Brooklyn Library in 2015. They won $15,000, and that’s what they used to get licensing.

Marshall shared that during the winter Island Pops doubles up as a coffee and chocolate shop, with the hope to eventually have a separate chocolate shop. “We already carry some Trinidadian chocolates here. We want to bring the Caribbean cocoa production up here through our platform.”

Inasmuch as they are still getting their feet wet in the business industry with their shop, Marshall and Khalid have an ice cream making class on Saturdays which began meeting in mid-July. The two-hour class will only cost $12 and will be teaching locals how to make ice cream.

Island Pops is located in 680 Nostrand Ave. in Brooklyn.