Amazin’ Mets fight their way back into the playoff race 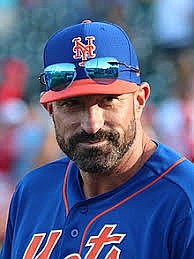 Fifty years ago, in 1969, the legendary baseball manager Casey Stengel tagged his team with the moniker Amazin’ Mets, as they transformed from being a directionless 73-89 outfit a year earlier, ninth in the then 10-team National League, to finishing first in the newly formed National League East division with a record of 100-62.

The Mets went on to defeat the Atlanta Braves 3-0 in the inaugural NL Championship Series then captured the franchise’s first World Series title with a 4-1 series victory over the Baltimore Orioles. While the current Mets, who were 58-56 when they hosted the Miami Marlins at Citi Field yesterday (Wednesday) afternoon, would have to go an impossible 42-6 over their final 48 games beginning with yesterday’s finale of a four-game series with the Marlins to equal the 1969 group’s 100 wins, they are trying to author an improbable story of their own just the same.

A little under a month ago the Mets were 41-51. General manager Brodie Van Waganen, along with owner Fred Wilpon and his son Jeff Wilpon, the franchise’s COO, were considering the efficacy of parting ways with some of their most valuable assets, notably starting pitcher Noah Syndergaard, before the July 31 Major League Baseball trade deadline. At the time the Mets bore the semblance of a collective unlikely to make a threatening run for one of the two NL wild card spots with the division title ostensibly out of reach.

Yet in what has become one of the most intriguing narratives in the sport since they fell 10 games under .500 on July 13, the Mets entered yesterday’s matchup with the Marlins seeking to consummate a four-game sweep just 1.5 games out of a wild card spot.

Prior to yesterday, they had won 18 of their last 24 games, including 12 of their last 13, to storm into the playoff mix, primarily on the strength of their starting rotation, which began the week with a major league best 2.59 ERA since the All-Star break. Instead of dealing some of their top players, the Mets kept their existing roster intact and added highly sought after pitcher Marcus Stroman in a trade with the Toronto Blue Jays for two minor league pitchers. The 28-year-old Stroman, a Long Island native, has been one of the best starters in baseball this season.

“We still have a long, long way to go, but it’s fun,” said Mets manager Mickey Callaway after his team took a doubleheader from the Marlins on Monday. “The fans were absolutely amazing out there and hopefully we’ll be selling out every game over the next two months and do something really special.”

To pull off one of the most remarkable in-season turnarounds since the franchise began play in the 1962 season, the Mets have to overcome an arduous remaining schedule that includes nine games with the NL East leading Braves—six of which are at Citi Field—six with the Phillies, three with the Cleveland Indians, who lead the American League wild card race, and three with the Los Angeles Dodgers, the team with the best record in the majors.