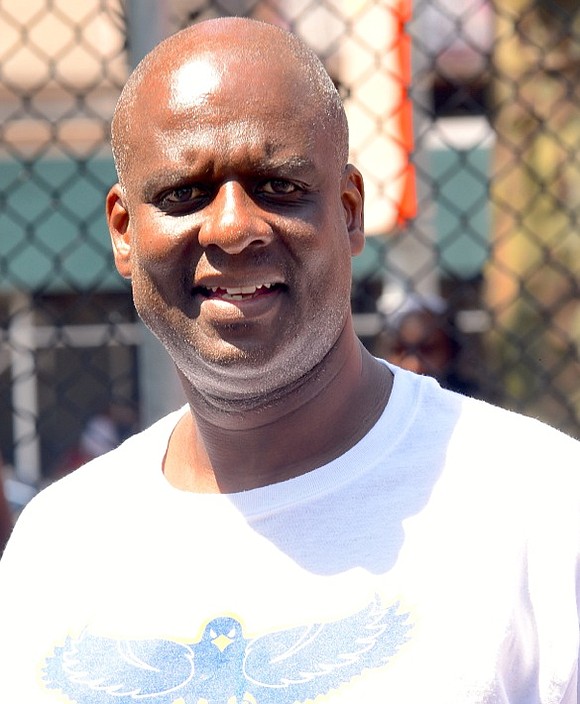 When their rivalry actually began is difficult to pinpoint, the story varies, but two of those responsible for bringing the noted programs into the new millennium is Dermon Player and Dwayne Mitchell.

Player has been a coach with Riverside, based in Harlem, on and off since 1990. Mitchell, with the Bronx based Gauchos since 1995. They've each won many trophies. So has their programs. They're the Coach K (Mike Krzyzewski), Roy Williams of their region, and there's even less distance between these two basketball programs than the ten miles that seperates K at Duke in Durham and Williams at UNC in Chapel Hill, North Carolina.

Mitchell, 59, from Brooklyn, like Player, has coached everywhere in this city and in the major youth basketball tournaments throughout the United States. He was part of the coaching staff at last year's Jordan Classic at Barclays Center, directing what will be, potential NBA draft picks in the next few years.

During the school season, Mitchell is the head coach of Monsignor Scanlan High School. This summer, he has his 12 and under Gauchos team in seven tournaments. They took the Rucker championship, one of the seven, in the 90-degree heat on Sunday afternoon, defeating Jadakiss Elite 53-37. They held them to zero points in the first quarter.

Both coaches are extremely proficient at working the sidelines in a gym or in the park. They're commanding, constantly walking back and forth, from their seat on the team's bench to the scorer's table, at times, the half-court line. Their voices penetrate through the sounds of the park to their players even with the volume of noise from Lenox Avenue behind them.

They're skilled and respected for their ability. It's as if coaching is inherent to both. They even seem to be comfortable working alone, and savvy enough to use the table as an assistant.

"How many time outs do I have? How many fouls," they'll ask of the table staff," although they know. The table personnel just reaffirms what's in their head.

Mitchell and Player also work the referees, astutely, and can be either complimentary or aggrieved, uncomplimentary, depending on the outcome of the game. But even in victory, the compliments to a ref for a good call or officiating a good game will never equal their raft if they think that their players, their team didn't get the best call or calls as Player, 51, who begins a head coaching position at Manhattan Center High in the fall, demonstrated after his 14 and under boys team lost by two in Rucker's championship on Sunday afternoon.

With all that was said, Player, a former assistant with St. John's and Seton Hall, pounded each of his seven players one by one, and praised their effort, how hard they worked.

"Y'all played hard. You'll learn from your mistakes," he said with more empathy than his thoughts that were expressed in regards to the officiating. His players, silent, listened and went to pick up their second place trophies as their names were called.

"They had their chances to win." Down by 11, "They brought the game to within one," Coach Derm concluded, not making any excuses, picking up another trophy.