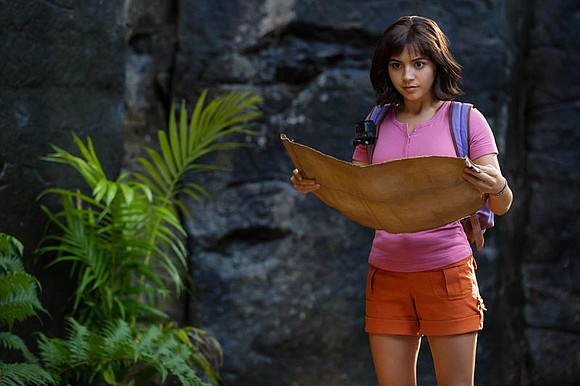 It’s been 20 years since Dora the Explorer was first introduced to audiences, the character was 7 years old. The show has since become a classic and an effective teaching tool, with Dora traveling the world asking questions and solving puzzles, alongside her big-mouthed backpack and a curious monkey, Boots.

In the live-action movie version—“Dora and the Lost City of Gold”—directed by James Bobin, Dora (Isabela Moner) is now in high school.

In the film, she often breaks the third wall (odd choice for a movie) but the quirky charm of her spontaneous songs for any occasion makes up for the strangeness of the third wall business.

The screenplay is by Nicholas Stoller and Matthew Robinson who creates a contemporary Latina heroine with an upbeat can-do personality.

Here’s the story, Dora was raised in the jungle by a pair of archaeology professors (Eva Longoria and Michael Peña). Later she was sent off to attend high school in Los Angeles with her cousin Diego (Jeff Wahlberg) while her parents set out to find the legendary city of Parapata. She’s not allowed to join them; instead she has to navigate the wild world of being a teenager, in the United States, in a high school with all the usual rights of passage, including the humiliation of hazing.

Here’s where the film shows it’s real strength. Ever the clever one, Dora assembles a small group of kids considered “different” including the class nerd Sammy (Madeleine Madden), who’s threatened by Dora’s intelligence, and the awkward Randy (Nicholas Coombe). Who knows how this happens (wink) but together with Diego, these three wind up kidnapped and shipped back to South America, where an adult, Alejandro (Eugenio Derbez) helps them escape. Now all the kids need to do is find Dora’s parents before the villains get to Parapata.

How does the film handle the characters made famous in the animated series? Great question. Dora still has her backpack but it no longer speaks. Swiper, the sneaky fox (Benicio Del Toro) becomes an animated-version and still, a sneaky fox. And Boots, still blue, is stylized to fit into the jungle environment.

“Dora and the Lost City of Gold” makes it clear that Dora is a true-to-the-bone explorer meaning that she risks her life for the love of knowledge. Plus, our Dora is fluent in English, Spanish and the Inca dialect the guardians of Parapata speak. What’s not to love?

This is great family entertainment and it makes learning fun, and very Dora the explorer.