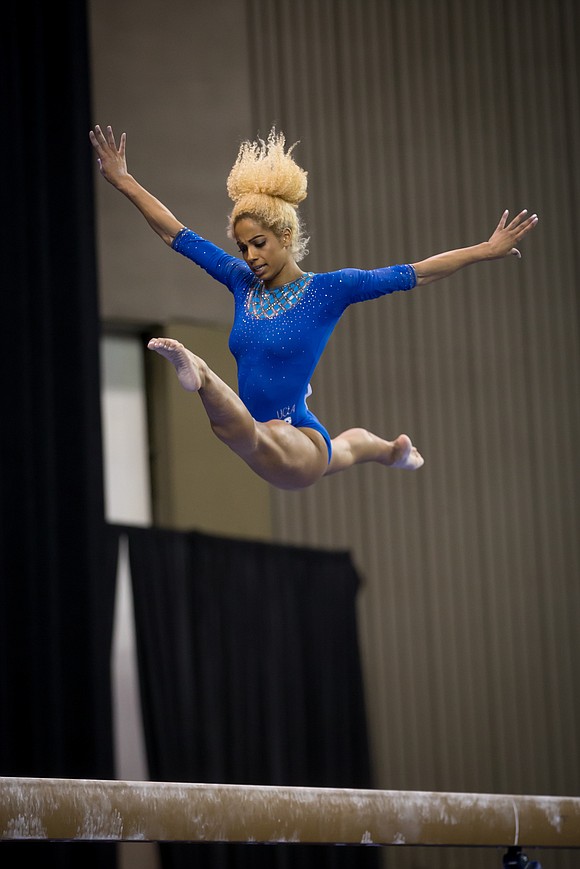 Already back at training the day after returning from the Pan American Games in Lima, Peru, gymnast Danusia Francis allowed herself a moment to savor her accomplishments. She finished seventh in the all-around and qualified for the balance beam final, the first Jamaican gymnast to qualify for

“The competition was absolutely everything that I wanted,” said Francis, 25, a 2016 graduate of UCLA. “Those were my goals. I’ve had them on a vision board, actually—all-round finalist, beam finalist. It was nice to know that with all my hard work I’d achieved my goals and made history for Jamaica in the process.”

The Pan-Am Games are an Olympic style, multi-sport competition for athletes from North, South and Central America and the Caribbean. For Francis, it was an opportunity to meet fellow Jamaican athletes because she trains in Great Britain; quite a few of the athletes train in the U.S. and obviously some train in Jamaica.

“A lot of the JOA [Jamaica Olympic Association] came to watch, especially at the beam final,” Francis said. “It was really, really nice to be around all the other sports. We had a really good vibe.”

Francis was born and raised in Great Britain. After being an alternate to the British Olympic team in 2012, she attended UCLA, became a six-time All American and won a NCAA title on the balance beam. She made a decision to represent her father’s homeland of Jamaica and came close to qualifying for the 2016 Olympics. After a two-year layoff from competition, she returned last year stronger than ever.

“[Pan-Am Games] was a huge highlight,” she said. “Obviously, we were making history by just being there, but to have my own personal goals of making those finals was amazing. This is a big stepping stone en route to qualifying for the Olympics. It’s given me that confidence boost.”

She will carry that confidence into the World Gymnastics Championships this October, where qualifiers for the 2020 Olympics in Tokyo will be determined. At the Pan-Am competition, she was able to identify weak spots and vows to work on those.

“It really motivated me and has gotten me excited for the World Championships,” said Francis, who recently got engaged to her long-time boyfriend and hopes for a wedding in 2021.

Next up for Francis is a visit to the U.S. later this month to participate in the Aurora Games in Albany, N.Y., representing Team World. She’ll compete in floor exercise and balance beam.