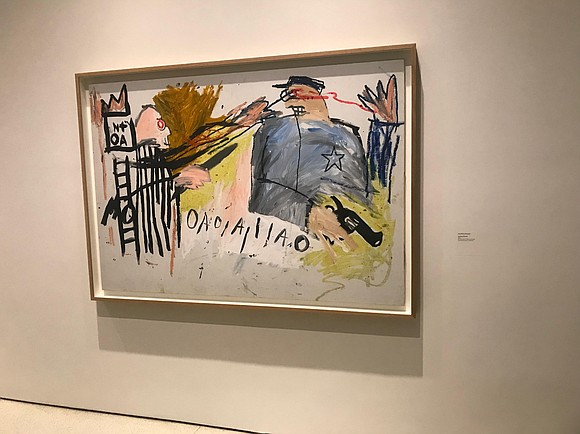 When it comes to police misconduct/brutality it is hard to dismiss the image of Eric Garner being taken down in a chokehold. In 1983, Garner was just aged 13 when the police killed Michael Stewart, an artist. Like Garner, he too was choked to death after being beaten senselessly.

Last week a judge in the disciplinary trial of Officer Daniel Pantaleo recommended that he be fired from the NYPD for his role in applying the chokehold that led to Garner’s death.

Almost simultaneous with this verdict, an exhibit, “Basquiat’s Defacement—The Untold Story,” opened at New York’s Guggenheim Museum. Incensed and outraged by Stewart’s murder, the famed artist, Jean-Michel Basquiat memorialized his fellow aspiring artist with a series of paintings, a few of them depicting the savagery of the attack with monstrous images of cops.

Basquiat, himself, after acquiring international fame, died of a drug overdose five years later, but his legacy and Stewart’s are broadly represented in the exhibit, which also includes several pieces from Stewart’s collection.

Accompanying the exhibit is an anthology of impressions from Stewart and Basquiat’s friends, associates, journalists, attorneys, and fellow artists who knew either one or both of them. Chaedria Labouvier, who also curated the exhibit, edited the exhibition’s booklet. In her introduction to the anthology, she notes, “It could be argued that ‘Defacement (The Death of Michael Stewart) (1983)’ is Jean-Michel Basquiat’s most personal painting. A first among equals in an oeuvre noted for its intensity and intimacy, no other work from Basquiat’s body of work has surfaced with more unfiltered feeling and vulnerability, nor has depicted a current event that touched his life

Luc Santé, Greg Tate, Fred Brathwaite, Eric Drooker, Michelle Shocked, the Rev. Herb Daughtry, attorney Michael Warren, Carrie Stewart, and Peter Noel are among the contributors. Brathwaite, an artist and one of Basquiat’s closest friends, recalled that Stewart was “a new artist making moves on the scene and one of the few people of color in the mix downtown at the time. He came from an intellectual, educated family and wanted to find a place where he could express himself in a cool way around like-minded people.”

Noel was a reporter at the Amsterdam News at the time of Stewart’s death. In his essay, he suggests that Stewart may have been targeted because he was seen kissing or holding the hand of a white woman, which was frowned on by the police. “Even today,” Noel continued, “all issues surrounding police brutality still evokes Michael Stewart’s death. He was strangled to death, which is the most egregious way of dying, perhaps the most personal.

“You cannot talk about Eric Garner, who was also choked to death by the police, without mentioning Michael Stewart,” Noel concluded.

Past is often prologue and this exhibit, which stands until Nov. 6, exemplifies that old adage.