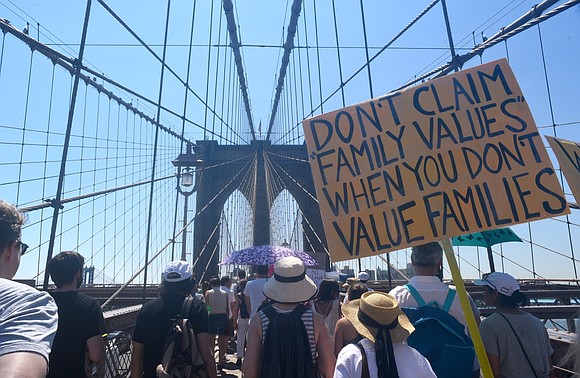 First enacted with U.S. immigration law in 1882, and the same year the Chinese Exclusion Act went into effect, the “public charge” standard meant that certain groups of people were a “burden on society.” The CEA barred Chinese laborers because they endangered the “good order of certain localities.” The term resurfaced in the Immigration and Nationality Act of 1952 that allowed the government to deport those considered a burden. It resurfaced again during President Bill Clinton’s administration when public charges could only be considered for cash benefits.

Camesha Grant, vice president for Community Connections and Reach at Food Bank For New York City, said the government is hurting those who need the most help and it’s another attempt to force immigrants out of the country.

“The policies coming out of the federal government are already having a chilling effect on some of our most vulnerable neighbors, scaring them away from SNAP and other vital resources like shelter and healthcare,” stated Grant in a statement. “This rule is the latest attempt to intimidate immigrants and their families—it would lead to thousands more New Yorkers going hungry every day.”

Grant noted that without access to SNAP, New Yorkers would be forced to turn to organizations like hers that are already stretched thin.

“The strenuous efforts of the nonprofit sector are not sufficient to make up the funding gap created by bad public policy,” Grant said.

Tom K. Wong, director of political science at the University of California, San Diego and director of the U.S. Immigration Policy Center, authored a study detailing how the public charge rule would impact undocumented immigrants in the country.

“The public charge rule that the Trump administration released today assaults the ability of taxpaying, legal immigrants to protect their health and feed their children by punishing them for accessing the most basic benefits needed to survive,” said 32BJ President Kyle Bragg in a statement. “If this final rule becomes law in 60 days, it could force new American families to forego healthcare, go hungry, or become homeless in order to secure a future in America for themselves or their families. Furthermore, the rule wildly extends the definition of those who would ‘likely’ become a ‘public charge,’ thereby severely restricting legal immigration.

“As one of the nation’s largest unions with majority immigrant membership, we support our allies who are already challenging this reprehensible rule in court, so that Black, Brown and white immigrants will continue to receive equal treatment and immigrants aren’t forced to choose between a green card and basic survival,” concluded Bragg.