Despite another loss, spirits high at Liberty’s UNITY Day 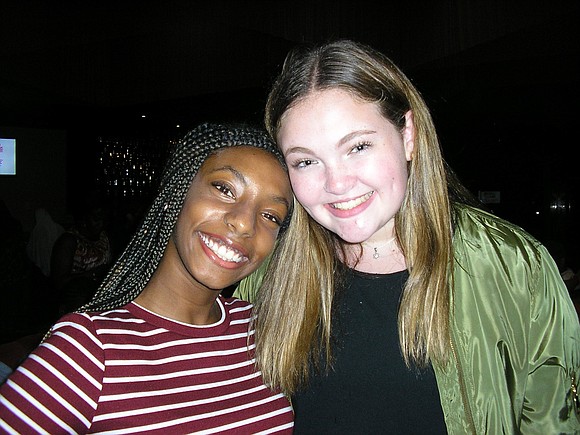 Attendees at the WOWsdom event

The New York Liberty lost 84–69 to the Seattle Storm on Sunday afternoon as the team made its regular season debut at Barclays Center. Prior to the game, the team hosted its third annual UNITY Day and fans were invited to attend either a pre-game youth basketball clinic or a workshop in partnership with WOWsdom, an organization founded by former WNBA President Donna Orender.

WOWsdom uses the power of authentic storytelling to provide encouragement and offer real world advice to girls and young women. The book “WOWsdom! The Girl’s Guide to the Positive and the Possible” contains letters from a diverse range of individuals and lessons that readers can apply to their lives. Several contributors read their letters to the audience.

“The stories are so touching and relatable. I feel it’s really inspiring,” said Tatiana Fahie, 15, who was visiting New York and heard about the WOWsdom event through Girl Up. Fahie said some of her takeaways from the event were “Be yourself and don’t let anybody tell you that you can’t be who you want to be. Embrace your friendships and relationships.”

Ita Ekpoudom, the founder and CEO of Tigress Ventures, read her piece about growing up in the South in an immigrant family and finding her inner strength and individuality. “Today was amazing, reading my letter in the presence of young people and feeling the energy in this room,” said Ekpoudom. “There’s so much excitement before we even go and watch the game.”

“As adult women, we’ve been there and done that, so we’re sharing our life experiences and giving our young girls some wisdom,” said Lakesha Burton, assistant chief with the Jacksonville, Florida sheriff’s office. A contributor to the book, her theme is resilience.

The Thursday before UNITY Day, the Liberty hosted a panel discussion about issues faced by women who’ve been impacted by the criminal justice system, which was attended by players Tina Charles and Tanisha Wright.

“The New York Liberty organization is doing a really good job of continuing to open up platforms so we can continue to have this conversation,” said Wright. “The panel was super compelling and informative. It opens your eyes up to so many things. It gives you a new perspective to see things in a different light.”

Wright was born in Brooklyn. Although she didn’t grow up in New York, she spent many summers in town and learned some valuable basketball skills. Playing at Barclays was a thrill. “It was awesome playing in front of friends and family,” she said.