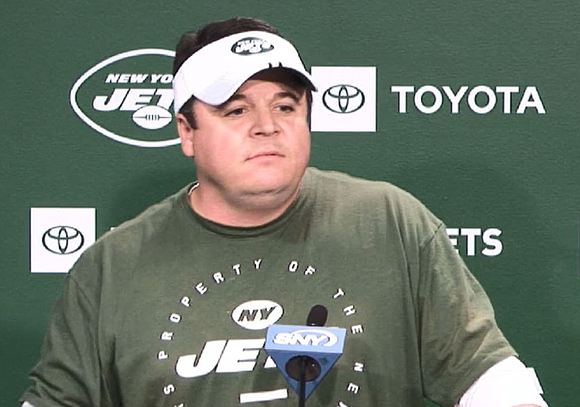 Loggains is in his 14th season as an NFL coach. He’s served as either a quarterback coach or an offensive coordinator since 2010.

Turning 39 on Oct. 1, Loggains got his NFL start with the Tennessee Titans, on staff for the 2008–2009 season as a quality control assistant, working his way up to the QB coaching position in 2010, and up to the Titans offensive coordinator position in 2012.

The Cleveland Browns hired Loggains as their quarterback coach in 2014, then he moved to the Chicago Bears in the same position in 2015.

Loggains moved up the ladder to become the Bears’ offensive coordinator in 2016. The Miami Dolphins then hired him in 2018 as their OC.

Well traveled, Loggains took over the Jets offensive coordinator job in late January, joining Gase who he worked for in Miami.

Williams, who turned 61 this week, has a more storied, interesting resume, one with a championship ring.

Williams got his start as a Missouri high school football coach in 1984, then moved on from there in 1988 to work with the coaching staff at Houston, an NCAA Division 1 school.

The Houston Oilers hired Williams in 1990 as a defensive assistant, special teams and linebackers coach. He then moved on to the Tennessee Titans in 1997 to 2000 as their defensive coordinator before landing the Buffalo Bills’ head coaching job from 2001-2003.

Williams then held defensive coordinator and assistant head coach positions with the Washington Redskins, the Jacksonville Jaguars, the New Orleans Saints, the St. Louis/Los Angeles Rams and the Cleveland Browns since 2004.

Williams finished out the 2018 season as the interim head coach of the Browns after Hue Jackson was fired after eight games.

Also well traveled, Williams had a bump on his road. In March of 2012 it was revealed that during Williams’ time with the Saints, he initiated a “bounty fund” that paid Saints players for injuries to opponents that would result in the injured player leaving the game. It was created to toughen up his defensive players, make them more aggressive.

After an NFL investigation that found Williams guilty and several players and other coaches culpable, Williams was temporarily suspended from coaching in the NFL until he was reinstated. His first job back was as a senior assistant defensive coach for the Tennessee Titans.

With Williams’ experience, there’s no doubt that he knows defense and players. He also has a specific expectation regarding a player’s intensity and their competitiveness.

So far he approves of the players on the roster.

“There has been a smile on my face since I’ve walked in here. These young men want to compete. Whether it’s an argument, whether they’re playing chess or checkers,” Williams said. “You can’t win at this level without that kind of competition.”