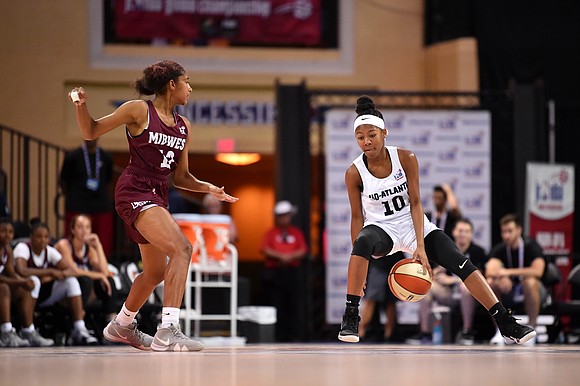 From Aug. 6–11 an impressive array of international basketball talent convened in Orlando, Florida for the 2019 Jr. NBA Global Championship. Top 13- and 14-year-old boys and girls from around the U.S. and the world played some ferocious games and met icons of the sport such as Dwyane Wade and Swin Cash.

Equal emphasis was placed on the boys and girls divisions, which was reflected in the broadcast schedule, court assignments and development opportunities. They also participated in NBA Cares Day of Service and a skills event.

“It’s very exciting and it’s a great experience to see and play against all these great girls from around the world,” said Sydney Anthony, 13, a point guard on the Mid-Atlantic team. She learned how to say “defense” in Chinese, which she said was really cool. Playing against foreign teams was enlightening.

Anthony’s teammate Tamir Whittle, 14, also a point guard, savored the experience of seeing new playing styles. “It’s cool. I learned some new things,” she said. “I want to work on ball movement…I definitely want to work on my defense. It’s okay, but it could be better.”

All regions of the U.S. were represented. The teams earned their spots by winning regional tournaments. The international teams came from Africa, Canada, China, Mexico, Asia/Pacific, Europe and Middle East, India and Latin America. They represent the top players in the Jr. NBA programs in their area of the world. Coaches come from the respective regions.

Fatou Cisse, 14, a guard/forward on Team Africa, has been playing basketball for about two years. She’s eager to improve her defense and learn more about game strategy. “I’m very happy. This is a great opportunity,” said Cisse. “I’m very happy to meet my teammates and play with them.”

Team Africa forward Ndeye Ndiaye, 14, who is from Senegal, knows there have been players from Senegal in the WNBA. “I want to be pro someday. I want to be the best in my generation,” she said. “I’ve enjoyed this opportunity and I’m very grateful. I’ve learned a lot of things and met new people.”