‘While I Breathe’ docu follows young, Black Democrat in the Deep South 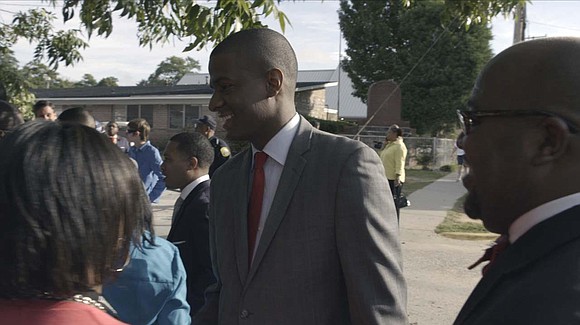 Moviegoers will get an inside look at the modern American political landscape as director Emily Harrold’s “While I Breathe, I Hope” comes to Brooklyn’s Stuart Cinema this August. The documentary follows attorney and CNN pundit Bakari Sellers, a young, Black Democrat aiming to bring positive change to a historically red state as he runs for lieutenant governor of South Carolina. Providing viewers with an intimate behind-the-scenes peak at both Sellers’ campaign and his deep ties to his home state, “While I Breathe, I Hope” also witnesses Sellers on the national stage after the Charleston church shooting alters the American political discussion.

The film, which was an official selection at the DOC NYC Festival and the New Orleans Film Festival, will have a four-day run at the Stuart Cinema & Cafe in Greenpoint, Brooklyn, from Saturday, Aug. 17, through Tuesday, Aug. 20.

“I’m thrilled to be able to bring this film and Bakari’s story, which is very much a story of the history of my home state, South Carolina, to audiences in New York,” said Harrold.

Named for the South Carolina state motto, “While I Breathe, I Hope” explores a question dominating today’s headlines: can a young Democratic politician help mend the rifts of a divided nation? Youthful, energetic and filled with purpose, Sellers also has a legacy of activism. His father, Cleveland Sellers, was central to one of the state’s most tragic Civil Rights era events: the 1968 Orangeburg Massacre, where he was wounded and arrested for protesting segregation. Bakari Sellers became the youngest Black elected official in the U.S. when he was elected to the South Carolina state legislature at the age of 22.

Through “While I Breathe, I Hope,” audiences get a personal and sobering look at Sellers’ 2014 grassroots campaign as he sets his sights on the state’s lieutenant governorship with an aim to bring equal rights, quality education, health care, and more to his fellow citizens. Yet as a presidential campaign upends normal national politics and a local tragedy shocks the country, Sellers and viewers will question whether the courage of a new generation is enough to combat the ghosts of America’s past.

“This film shows me at my highs and my lows. It is my truth, and I hope it will inspire everyone who sees it to get more involved in creating the change they want to see in the world,” said Sellers.

“Bakari Sellers’ journey is an important one that I hope moviegoers will come out to see. It sheds light on how racism plays a role in our politics today as we see more and more people of color running for office—not to mention, it’s a beautiful thing to see someone from South Carolina on the big screen,” commented Charlamagne tha God, radio personality and an executive producer of the film along with Marco Williams, Jedd Canty and Karen Kinney.

The Stuart Cinema & Cafe is located at 79 West Street in Brooklyn. For more details or to purchase tickets, please visit https://www.stuartcinema.com/ or call the cinema at 347-721-3777. For more on these and other upcoming screenings follow the film’s team on Twitter at @BakariDoc and on Instagram and Facebook at @BakariSellersDoc.