Channelling Eartha Kitt In 'Down To Eartha' 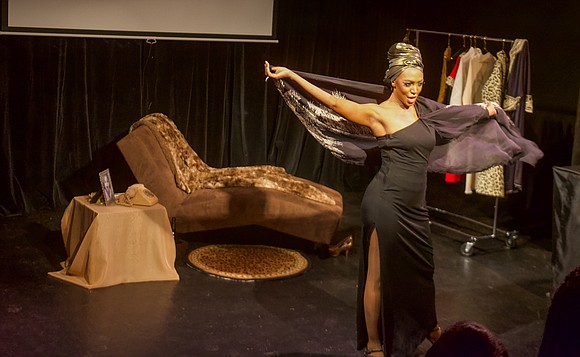 What do you really know about Eartha Kitt? When I think of Eartha Kitt, I think of her as Catwoman on “Batman”, or as a guest star on “The Nanny” or as the woman in “Boomerang” that wanted to seduce Eddie Murphy. But I found out this weekend that there was a much more vulnerable, sensitive, caring, determined and absolutely touching side to this actress. In fact, in “Down To Eartha”, a one-woman show written and performed by Dierdra McDowell, which played at the Gene Frankel Theatre at 22 Bond Street in Manhattan, I got a knowledge of Kitt that has given me a new appreciation for her life and it educated me on the diverse struggles in her life.

I never knew that Eartha Mae Kitt, her birth name, was sent away by her mother because her mother’s new husband didn’t want this yellow child in his house. She was actually given to a sharecropping family and had to do sharecropping as a small child. At the age of 5 she was abused and molested by the family’s teenage sons. She was savagely tired to a tree, beaten and laughed at by the jealous children of this family.

The production has actual B&W photos of Kitt as a child with this family. To show the audience the deep and very human side of this woman who was an actress, singer, dancer, activists, author and songwriter, McDowell tells of a very tragic event that happened in Kitt’s life. McDowell takes on the look, mannerism, voice and tone of this beloved performer. She is a kindred spirit and brilliant at channeling Eartha Kitt. She dazzled the audience with her singing prowess, her sensuality and seductive moves and dress. She was accompanied musically offstage by drummer Atiba Morales. McDowell embodied Kitt, but not just on the superficial level, there appeared to be a deeper connection. You could tell that McDowell is very committed and connected with Kitt by the way that she became Kitt in many ways, including keeping her eyes wide throughout most of the hour-long performance. She also wanted the audience to realize that Kitt was a well-educated woman who had traveled the world and could easily converse in several languages including Turkish, German, Spanish, French, which McDowell did. Through all the performing capabilities however, Kitt was also someone who cared about her Black people and when invited to the White House by LadyBird Johnson to talk about crime in the neighborhoods, went there with a mission. Kitt stood in a room with 50 other women and told the President’s wife that the crime in the Black communities had to do with the country being in the Vietnam War. She said very directly that young men would rather commit crimes and go to prison than be sent to Vietnam to die in this pointless war. That bold move got her Blacklisted by President Johnson for 10 years in the U.S. This was a very difficult time for her, but being a fighter she went out of the country to make a living and did very well. She had to make a living as a single mother to her daughter Kitt.

I love how director Marishka S. Phillips has video footage and B&W photos of Ms. Kitt with the President and Ladybird. When McDowell comes out and is singing and talking as Kitt, this passion, this respect, this love and dedication to letting people know this woman’s story come out so boldly. McDowell is also beautiful and has a similar body shape in some ways to Kitt. It was so wonderful to see an artists who was so moved with the struggles, battles and triumphs of one of the ancestors that helped pave the way of Black entertainers to come, but then, not just to tell her story, but let people see that she had no storybook childhood, if anything, it was a nightmare, but she still managed to triumph. Kitt’s love and dedication to her people was definitely something that should be shared with the masses and I’m so glad that I had the opportunity to learn about these aspects of her life.

While the production presented by MPTP Productions International closed this weekend, the director is hoping to remount it at another venue. If you want to keep up on what will happen next visit www.downtoeartha.com.