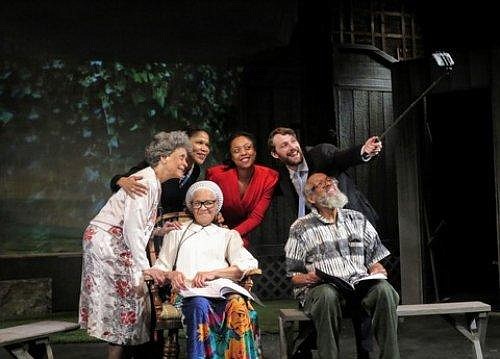 One of the purposes of Black Theatre is to powerfully tell our stories, enrich our lives and let the world know the struggles and the issues that Black people have not only endured, by managed to thrive through. This purpose was well done by playwright Karimah with her play, “Imminently Yours,” the Negro Ensemble Company’s most recent production, which closed. In this play, with an all-star cast of theatre veterans—Dorothi Fox; Arthur French and Edythe Jason--and riveting direction by Count Stovall, the audience at Theatre 80 St. Marks was introduced to a Black family who had a secret and one they had been protecting for generations.

Living high upon a mountain, on land that had tiny shacks that didn’t look like much, Alberta (played by Dorothi Fox), Oscar (played by Arthur French), and Lillie Mae (played by Edythe Jason) have their niece Edna and her daughter Mildred spending some time with them. Edna, a lawyer from the City, used to have to go visit family in this place as a child and she resented it. But, as a child her mother and her elders taught her the rules of coming to this mountain and one of the rules was that there was something behind a wall of poison ivy that no outsider was to know about. Edna never sent her daughter Mildred to the mountain and on her first trip there, didn’t share with her the family secret, that no outsiders needed to know what the family truly had behind that wall of poison ivy. Being a young woman, when James, a young White attorney representing the governor, comes to visit this community on the mountain, Mildred finds herself attracted to him. During his visit he meets with the elders of the family, who are very unfriendly and suspicious of why he is there. They basically give him no information and let him know that he is not welcome. He tries to invite them to come speak with him at a hotel in town, a hotel which in the past was so racists Black could not walk through the front door, but now he offered them a meal on him, and chance to sit down and talk and to be able to walk through the front door. This offer they vehemently refused. Mildred, meeting James briefly, goes down the hill, gets a tour of the town by James and has dinner with him at the hotel that used to be racist. When her family is asleep she brings James up the mountain and gives him a tour of the shacks, but she also shows him what is behind the wall of poison ivy and that is the beginning of the end for this family and historic Black community. You see, behind the wall there was a beautifully, brilliantly constructed man-made lake and spacious mansions. James reports this to the governor, and that is when all hell breaks loose as surveyors descend on the community to evaluate its worth. A secret that has been kept for generations is revealed and the state declares imminent domain and viciously takes the land from the proud elders of this community and offers them financial compensation. But, what type of financial compensation is really adequate to steal a person’s home and their history from them.

What Karimah depicts in this play, sadly is something that the government can and does get away with all the time. My family personally went through something like this, but not on the grand scale that Karimah is talking about. We had a summer home in Atlantic City during my entire childhood, right off the beach and by the beginning of the Broadwalk. As a child I remember being forced to go there for vacation, but after a while appreciating what my parents had. After several years went by the city came and decided that it wanted to level the building in that part of the community to make a parking lot. My mother received a letter telling her that the city was seizing the property through imminent domain and there was nothing she could do about it. We, as a family were so hurt to lose something that my parents had purchased and a home that had come to mean our place to rest and get away from it all. So, imagine the devastation that would be felt by an entire community that successfully kept its beauty, industriousness and accomplishments hidden from the world for generations, only to have one person ignorantly slip up and divulge everything.

When the government comes to take everything from this community the elders are upset that the younger generation in their family wasn’t taught the traditions of the family and made to understand the importance of the community that lived on the mountain, high up, away from the town. A community of proud, hardworking Black people, that the White town people thought were just living off of the scraps of the land, but actually were thriving! Karimah truly makes one realize the importance of telling our family and community traditions and stories to our younger generations and getting them to realize how important they are.

The cast delivered sterling performances. It was riveting to watch veterans, Fox, French and Jason plays these very stunning roles. Their characters were the keepers of the history, the keepers of the secrets--the storytellers. Which, of course in Black culture, are always the primary roles. Colette Bryce was moving as Edna, Nila Akilah Robinson was delightful as Mildred and Ryan Desaulniers was good as James.

As I said in the beginning, Black Theatre has a purpose and that is something filled by Karimah and always captured and delivered by the Negro Ensemble Company. Thank you.