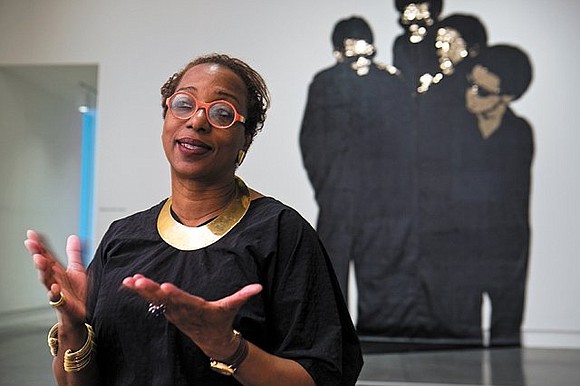 Valerie Cassel Oliver is an African-American staple of the modern and contemporary art world. Since being appointed as the contemporary art curator for the Virginia Museum of Fine Arts, she has brought exquisite Black exhibitions to Richmond like “Cosmologies from the Tree of Life: Art from the African-American South.” She previously curated at the Contemporary Arts Museum Houston, Texas for 16 years and was the director of the visiting artist program at the School of the Art Institute of Chicago.

We spoke with Cassel Oliver about the thought and history behind her accomplished career.

AMN: What were your ambitions as a child, and how did you begin learning about art?

VCO: As a child, I grew up in a generation of the emergence of “Sesame Street,” “The Electric Company” and all of the amazing things that were happening on public broadcasting. I am the youngest of eight, and I spent a lot of time with my mom, plopped in front of PBS shows, which opened a whole world of imagination. I was a very imaginative child. I [also] loved literature and theater. So, I grew up to closely align my creative vision and energy toward theater arts. It wasn’t until I became an adult that I began to gravitate toward visual arts.

AMN: When did you first notice a need for African-American art exhibitions?

VCO: Straight away. There was just an absence. They were very far and few between. I grew up in Houston, Texas, and before there was the Menil, there was the Museum of Fine Arts and the Contemporary Arts museum. If there was African-American art being featured, and I am sure there was because when I worked there and did my own research for projects, there was Tom Lloyd [pieces] featured back in 1969. So, I knew Black artists were being featured in exhibitions in Houston. But I was exposed to things like pop art, conceptual art practices and being in theater as a teenager, it was inspiring for me. That liberated [my] mind to accept all types of art forms.

AMN: How do you get inspiration for your exhibits?

VCO: I think I am always looking for what’s hiding in plain sight. If there were Black artists being featured in exhibitions they were not immediately known to me. Maybe because they felt liberated through their art forms to create things that did not have immediate legibility or they were more involved in practices and forms that pushed their experimentation in different ways, but it was the myriad ways that artists of color and Black artists in all facets that Blackness encompasses and how they moved in the world in places that were visible and places where they were not visible.

Being a curator of contemporary art, I’m always very interested in those artists of color who create inhibition and innovation in the field, but who were never recognized as such. That’s been a driving force. Of course, you can’t embrace every artist, but there were very prominent artists who were very foundational in terms of how we understand [certain] narratives. Often times, [those artists] are missing from the [contemporary art] narrative. It’s always been a little surprising to me having worked at a university where these young artists were really looking to see who their forebears were. They understood that they [as artists] didn’t come from a vacuum, and that there were others who were never identified in that context of their education. They were constantly searching for [Black] artists, so I felt strongly that repository needed to be developed and built upon if they had already been established and making their narrative available.

AMN: You’ve had successful exhibits like: “Radical Presence: Black Performance in Contemporary Art” (2012) and “Cinema Remixed and Reloaded: Black Women Artists and the Moving Image” (2008) at the Contemporary Arts Museum Houston. Were all your Black exhibits successful immediately or was it a process?

VCO: It’s hard for me to know what is successful. To get things off the ground and secure loans to make everything happen often times for the curator is the definition of success. The fact that there is a catalog that chronicles that information is a marker of success. How it radiates and reverberates in the world, of course, you would want it to have that. When I think of an exhibition like “Double Consciousness” which I often hear people talk about, Black conceptual art since 1970, which is an [exhibition] I did in 2005—that show never traveled. It was only seen in Houston, and yet people refer to it as a seminal moment. So, to me, success is really about building upon the repository and contributing new scholarship to the field. [Creating exhibitions] that people can go back to, reference and dig into.