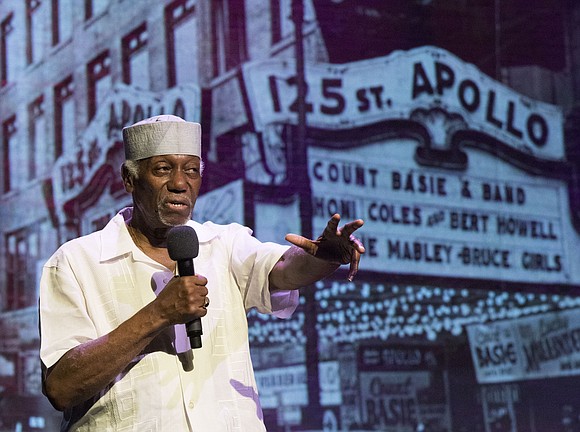 One of the highlights of the Harlem Week 2019’s cornucopia of events celebrating the past, present and future milestones of the world’s most famous Black community throughout July and August was a stimulating conversation with leaders of some of Harlem’s outstanding cultural institutions that took place at the Apollo Theatre Thursday, Aug. 15.

Placing the evening’s conversation in historic context, Boyd noted that 2019 marks several “culture-shifting anniversaries.” He noted that in 1619 the first African captives arrived on these shores and that in 1919 Blacks fleeing the South and the KKK’s reign of terror sparked the Great Migration to the North sparking the cultural era known as the Harlem Renaissance, which Boyd called “the well-spring of the local anniversaries being honored at this Apollo program.”

“Were it not for the Harlem Renaissance there wouldn’t be the Apollo Theatre, the Dance Theatre of Harlem or the National Black Theater,” Boyd said weaving a rich tapestry evoking such cultural icons as W.E.B. DuBois, Duke Ellington, Oscar Micheaux and others who made up a tsunami of poets, playwrights, journalists, novelists, musicians, dancers, painters, sculptors “and other cultural artist/activists promoting the struggle for Black liberation.” Against this backdrop the first panel of the evening took the stage and set the stage by painting a picture of culture as a major force in the evolution of the race.

Representing the Apollo Theatre, celebrating 85 years, was Executive Producer Kamilah Forbes. Joining her was Sade Lythcott of the National Black Theatre, which is celebrating 50 years, and Dance Theatre of Harlem Artistic Director Virginia Johnson, whose unique Ballet company is also celebrating its 50th anniversary. A clip from a documentary about the Apollo Theatre scheduled to air in November on HBO, set the stage as Byrd introduced Forbes who shared a brief history of the Apollo.

“This was a theater that was the heartbeat of the community. We had not only African-American onstage, in the audience, producers and stage crew—a very different kind of scenario of other theaters in Harlem, like the Cotton Club,” said Forbes noting that after flourishing in the ’30s, ’40s and ’50s, the theater fell on hard times for several decades only to be reopened “with the significant leadership of Mr. Percy Sutton, who “envisioned the Apollo Theatre as being at the epicenter of African-American theater and entertainment.”

Reminding the audience of its rich legacy, Byrd introduced NBT’s Lythcott and DTH’s Johnson. Lythcott recalled her mother, Dr. Barbara Ann Teer who founded this groundbreaking theater company fueled by “an urgency to heal our communities” and devoted to the belief that this could only happen in “a community in which we lived, worked and served, so Harlem was never a question. It was always the answer.” Explaining that “audiences may come to NBT to see a show but what we’re actually doing is offering them back themselves by creating an art form that wasn’t self-conscious but God-conscious.”  She recalled how Dr. Teer turned a catastrophic fire that reduced NBT to rubble into an opportunity to create the magnificent institution that today dominates the corner of 125th St. and Fifth Avenue thanks to a vision that saw Harlem as the cultural capital of the world.

Following a video highlighting Arthur Mitchell’s history and legacy as the first African-American principal with a major American ballet company, Dance Theatre of Harlem’s Johnson spoke about the groundbreaking ballet company. She described the 17-member, multi-ethnic company as one that performs “forward-thinking repertoire, which includes classics, George Balanchine neoclassical works by him and others, including those resident choreographer Robert Garland, as well as innovative contemporary works that use the language of ballet to celebrate African-American culture while carrying a message of empowerment through the arts for all.”

“Arthur Mitchell was a child of Harlem. We did lose him last year and every time I think about all he dreamed and all he did, I just have to pause. He gave us such an important gift with Dance Theater of Harlem. He was inspired by this art form and managed to become incredibly successful at a time when we were basically barred from ballet. A lot of people couldn’t understand how he did it. But they didn’t know Arthur Mitchell. They didn’t know his will and his vision. So they were surprised when he decided to step into the world and try to do something that had as much impact as Dr. Martin Luther King Jr. had in changing the way America saw itself, by using his skills as a ballet dancer to make a difference.”  Johnson recalled how this very successful star of the New York City Ballet “was asked by the U.S. government to start a ballet company in Brazil but, when on his way to the airport April 4, 1968, he was stopped in his tracks [by news of the assassination of Dr. Martin Luther King] and decided there was much work to be done here at home. He said, ‘I’m going to start a school in Harlem and I’m going to give these young people a future by giving them skills that are going to change their lives—skills like  discipline and focus and the most important skill of all, perseverance that strength that you have when someone says, ‘No, you can’t do x’ and you say, ‘Yes, I can.’”

When Byrd asked Johnson to describe how Mitchell succeeded Johnson spoke of both Mitchell’s vision and his will as well as his skills and connections including “his good friends Cicely Tyson and Brock Peters, as well as Ms. Alva Gimbel [of the department store fortune]” saying, “the building that we have was given to us by Ms. Alva Gimbel.” Describing how DTH moved from being a local to a global success, Johnson noted that DTH has always been a touring company and explained that “Arthur Mitchell always told us, ‘You are ambassadors and you are carrying the name of Harlem all over the world and you have to show people what it means.’”

Byrd and his panelists closed the discussion by acknowledging an ideal that united them all—the sense of “collective work and responsibility,” and the role Harlem’s cultural institutions play in reinforcing a strong sense of community as the Apollo theater’s Kamilah Forbes said that what binds them together is their awareness that “It is our responsibility to build a cultural ecosystem in this mecca of culture, Harlem, so we can build an even bigger and brighter future as we push our own culture forward.”