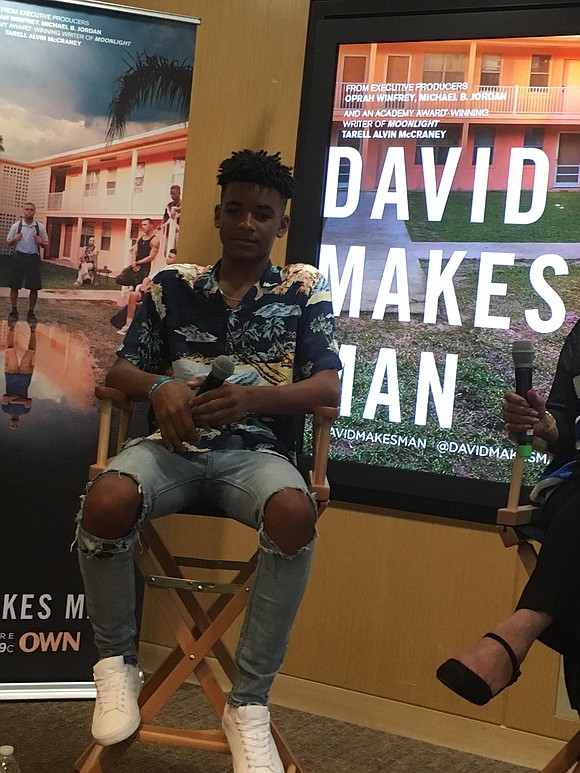 The story might appear simple when reading the synopsis but it’s a complicated and delicately layered story that will tug at the heartstrings even if you don’t think yourself sentimental or deeply feeling.

The story is about David (Akili McDowell) a 14-year old prodigy who struggles with the death of his best friend, a drug dealer named Sky (Isaiah Johnson). Torn with his inner desire to succeed as one of the few Black students at a magnet school, to survive his surroundings he tries to balance two personas. David’s mother Gloria (Alana Arenas) is a single mom and former drug addict determined to make a better life for her family. At school one of his caring teachers, Dr. Woods-Trap (Phylicia Rashad), nurtures his thirst for learning but has no idea that David is dealing with pressures to sell drugs to help support his family. Life for David is not easy. He’s still having conversations with Sky, the drug dealer and father figure, who continues to appear to him in vivid visions after his death.

The show takes on big themes and is grounded in the real world as imagined by McCraney. One example of unseen trauma is laid out for examination when the subject of abuse is brought up in the storyline of Seren (Nathaniel McIntyre), one of David’s friends, who is dealing with molestation in his household, a secret that’s tearing Seren slowly apart.

A poet first, McCraney’s achievements include an Oscar for Best Adapted Screenplay for “Moonlight” (adapted from his play “In Moonlight Black Boys Look Blue”) and a Tony nomination for “Choir Boy,” which marked his Broadway debut. Serving as executive producers for “David Makes Man” are McCraney, Michael B. Jordan, and Oprah Winfrey.

Phylicia Rashad: She is a woman who appreciates intelligence. She respects it. She sees it in all of her students. In David, she sees an opportunity to open vistas for him.

AMN: Akili McDowell you play David. What was it like for you, as a young actor, to work with Phylicia Rashad?

Akili McDowell: Oh man [laughing] it was wonderful. She was very helpful and a lot of fun.

Nathaniel McIntyre: You’re right. Siren is dealing with trauma. He’s being abused at home by his stepfather. So a lot of trauma.

AMN: Ms. Rashad did you have a teacher like your character, Dr. Woods-Trap?

PS: I had many teachers who were like this—so brilliant and accomplished in academia they could have been anywhere, but they choose to be where they are for the sake of the people they can influence, whose lives they can uplift and impact. Also, our teachers continued to study and that is also a part of [Dr. Woods] this character. I had so many aunts and uncles that were teachers and they cared about their students. She tells her students, ‘Don’t waste our time.’ It’s a life lesson.

AMN: Did Ms. Rashad teach you anything as actors during the shoot?

AD: Yes. Once I kept forgetting my lines. That’s unusual for me. I’m usually really good at memorizing my lines but she told me to walk backward and recite my lines. I did and I got it.

NM: Wow—so many things. I learned something new every day from her and all the actors. It was a wonderful experience.

AMN: How did you get involved with this amazing television show Ms. Rashad?

PS: I received a call that McCraney had written a new project. They didn’t have to say anything else to me, I said yes. Also, this show is visually stunning. The director [Michael Francis Williams] for the pilot set the tone, the look of “David Makes Man.”