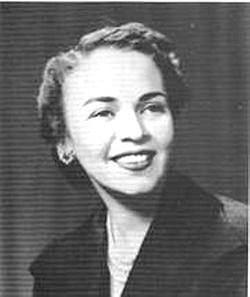 When your father is the famed biologist Ernest Everett Just and the first to receive the NAACP’s Spingarn Medal, great things are expected of you, and his daughter Margaret Just Butcher forged her own path of brilliance and achievement. While Butcher is best remembered for completing Alain Locke’s book “The Negro in American Culture,” she was also a distinguished scholar and teacher, and civic leader in the nation’s capital.

Butcher was born on April 28, 1913, in Washington, D.C. and was the oldest of three children. Her mother was Ethel Highwarden whose mother was one of the first Black female graduates of Oberlin College. As a child her intelligence and native abilities were evident, and expressed a particularly serious interest in literature and the humanities.

She attended some of the best schools’ in the city and later even studied in Italy, traveling there with her father in 1927. And she accompanied him to several universities where he taught, taking courses at Emerson College and Boston University where she received her Ph.D. in 1947.

Her teaching career was extensive and there were stints at such prestigious universities as Virginia Union (1935-36) where she was a professor of English; from 1937 to 1941 she was a teacher in the public school system in her hometown; and her longest post was at Howard University from 1942 to 1955. Later, from 1971 to 1982 she was on the faculty at Federal City College.

She was a visiting professor in the humanities in France from 1949-50 and from 1960-65 Butcher was the director of the English Language Training Institute in Casablanca. In 1968, she was back in Paris where at the U.S Embassy she was the assistant cultural affairs officer. Besides her expertise in the humanities, literature and English, she was also involved in the administrative affairs in the D.C. school system. She was an able leader at a time when the D.C. school system was in a transitional mode to end segregation. Few board members of the school system were as ardent in their fight to integrate the system as she was.

In fact, her passionate commitment was often met with derision, and this only empowered her advocacy for change, as she was often unwilling to bite her tongue when it came to her adversaries. Butcher was honored for her fearless resolve and militancy by the Lambda Kappa Mu. On the political front she served as a member of the National Civil Defense Advisory Council in 1952, replacing the incomparable Mary McLeod Bethune; she was a special educational consultant to the NAACP where she assisted Thurgood Marshall; and she was elected a district delegate to the Democratic National Convention in 1956 and 1960.

But all of these accomplishments were soon overshadowed by her association with the esteemed Locke, the putative godfather of the Harlem Renaissance. When Locke became ill and unable to complete his book, Butcher came to his aid remained by his side until his death in 1954. Her devotion to Locke, her mentor, was unwavering; some of it has been captured in Jeffrey Stewart’s impeccable biography “The New Negro—The Life of Alain Locke.” Stewart wrote that as soon as she heard of Locke’s illness she hurried to his bedside. She “came to his house every day, made all of the arrangements, and took Locke to Valley Forge Hospital herself.”

As Stewart noted, quoting another person familiar with her relationship to Locke, “She was a take-charge sort of woman, who would cuss you out in a minute, but who got things done.”

Once Locke was released from the hospital, Butcher resumed her nursing, visiting him daily, preparing his meals, and doing her best to restrain the scholar’s unbridled energy and activities. Locke’s contract to complete his book was overdue, and Butcher volunteered to help him complete the book, Stewart wrote.

Even as she devoted considerable amount of time assisting Locke, Butcher was also working on her dissertation and teaching three times a week. But she was undaunted and finished the first draft of the manuscript. That was in the spring of 1953. Two years after his death in 1954, Butcher published the book. The reviews of the book were mixed, and several critics found it far short of what even some white scholars had done on similar studies. “The Negro in American Culture deserves to read,” wrote Henry Winslow in an EBONY magazine review. “That it’s not the monument it might have been is less a criticism of Dr. Butcher’s effort than a tribute to Alain Locke. He was inimitable.”

Here is a sample of what Locke wrote and Butcher edited and refined. “The position of the Negro in American culture today is strategic and promising; it is his spiritual recompense for generations of longsuffering and will for some generations yet furnish the basis of his contributions to the spiritual treasury of the nation.” Critics have wrestled with the issue of where Locke ended and Butcher began.

Butcher was married for a brief spell to Stanton Wormley and they had one daughter, Sheryl Everett. She married James Butcher in 1949 and they divorced 10 years later. Butcher died Feb. 7, 2000. She was 86.