Experience the past and present in Natchez, Mississippi 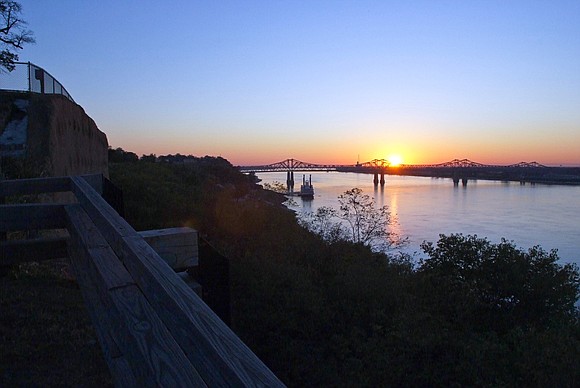 The past is ever present in Natchez, Mississippi. There’s the history you see, like the majestic antebellum homes, then there’s the invisible, yet palpable history that permeates the air like ghosts. At more than 300 years old, this town has stories and secrets. But what’s just as fascinating, is the glimpses of the future you can also see.

It’s hard not to be enraptured by this southern belle of nearly 15,000 people that at one time had more millionaires per capita than some bigger cities. It’s a place where tradition still means something. You might want to put Natchez on your fall getaway list. Since 1932, in the fall and spring you can tour Natchez’s historic mansions. No need for a GPS. The tours are color-coded with signs leading visitors from house to house. Whichever you choose you’re in for a treat. Be ready to be greeted by someone on the steps in a hoop skirt from the Civil War era.

Each home is an adventure. Take for example, The Gardens, couched between the Natchez City Cemetery and the Natchez National Cemetery on 35 Cemetery Road. The home, which has been occupied by the same family since 1881, was built in 1794 as a summer retreat for Spanish Territorial Governor Stephen Minor. During the Civil War, it served as a federal hospital. Another favorite is Green Leaves. You’ll get a peek inside a family legacy. All the original furnishings and family memorabilia is there, including a huge collection of teddy bears, dolls and antiques. With all the wedding photos and painted family portraits, you’re drawn in, wondering who are these people? You are curious. The home, built in 1838 at 303 S. Rankin St., has been occupied by descendants of the Koontz-Beltzhoover family since 1849. It’s called Green Leaves for a reason. When you finish the tour, you’re captivated, caught up in all the stories you heard about the families, the war, and memories of all the finery, gold, crystal, silver, fine lace, elaborate canopy beds, beautiful rugs, chandeliers. The present is almost jarring.

That’s Natchez. It shakes you up. If you’re full after working your way through the history of the wealthy, take the African-American Heritage Tour. The Forks of the Road Slave Market is an intersection where slaves were brought from different parts of the country to be sold at market, which was the second largest in the South. It doesn’t take much to imagine the horror, especially after the tour guide lets you hold the heavy chains they wore and a whip. You don’t know what to say and worse, what to feel. But there’s more to the African-American story in Natchez. The tour recounts the stories of native author Richard Wright, Blacks who became doctors, lawyers, bankers, business owners and congressmen. Natchez was one of five cities to have a Black mayor during the Reconstruction period.

There are many tales along St. Catherine Street. Top off the tour with a visit to the African-American Museum of Culture and Heritage.