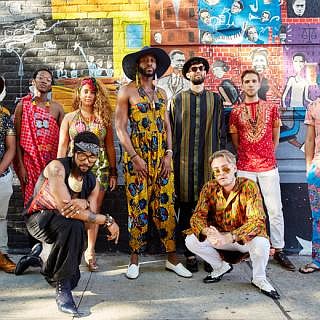 Mwenso and the Shakes

The alto saxophonist Charlie Parker died in 1955 at the age of 34. Now—64 years later—aspiring and established musicians are still attempting to figure out how the hell did he run those outrageous riffs and beautiful harmonies.

The Charlie Parker Jazz Festival in its 27th year pays tribute to the genius of “Bird” and his musical gift to the world. On Aug. 24 the festival hits in Harlem at Marcus Garvey Park (124th Street at Mt. Morris Park) and Aug. 25 in Tompkins Square Park (East 10th Street between Avenues A & B on Manhattan’s lower eastside). Both concerts will run from at 3 p.m.-7 p.m.

The performers at Marcus Garvey Park will feature the all-out singer Dee Dee Bridgewater, who can swing from a ballad to a hardcore jump up and dance jazz standard; the tenor saxophonist Ravi Coltrane, who has developed his own style and sound outside of his masterful father John— Ravi carries on the tradition following his own path; the vocalist Quiana Lynell Reclamation: she will be joined by ladies of like-mind; tenor saxophonist Camille Thurman, who is currently the first woman to join the Jazz at Lincoln Center Orchestra; the Brooklynite and vibraphonist, who refuses to be categorized Nikara Warren and the harpist Brandee Younger, who becomes more stirring with each performance. When Lynell takes the stage, she guides the listeners on a journey where “jazz collides with soul.”

The following day Tompkins Square Park will present the drummer for all seasons Carl Allen’s Art Blakey Tribute; legendary saxophonist George Cole Trio (his saxophone solo on Maiden Voyage, 1965 still brings chills); the pianist, who turns every ballad into a starry-sky Fred Hersch; and the young saxophonist and Harlemite Lakecia Benjamin whose musicianship becomes more stimulating with each performance.

A heavenly shoutout to Jazzmobile’s production coordinator and Charlie Parker Festival producer and stage manager Johnnie Garry. It was Garry’s love for the music and Harlem that prompted him to suggest that the founders of the Festival (The Charlie Parker Foundation) come into Harlem, which just proves Garry is still the man.

The Newport Jazz Festival boasts two great qualities: thrilling music and Fort Adams, which is situated at the mouth of Newport Harbor with panoramic views that leave you speechless. The festival (Aug. 2-4) at the Fort featured four stages of staggering music. This year’s artist-in-residence was the exceptional pianist/composer Herbie Hancock from the legendary Miles Davis Quintet (1965068) to his own “Maiden Voyage” album to his fusion hit “Head Hunters” and beyond.

The artistic director since 2017 has been the bassist, composer, big band leader Christian McBride, who has been shaking up the landscape with a variety of acts. This year it was somewhat ironic that the closing performer on the main stage was poet, activist, actor and rapper Common joined by pianist Kendrick Scott, vibraphonist Joel Ross, Harish Raghavan Matt Stevens, and Walter Smith III. The mission was accomplished that audience was filled with the 20-30 year crowd and jazz is always looking for that younger crowd, right.

With over 60 acts performing it would be very difficult to see all those acts much less write about them. So this is the short highlights version and trust me, many great musicians will not be included as that would take up six pages or more.

Christian Sands 3 Piano Erroll Garner Tribute featuring Helen Sung and Tadataka Unno. They soloed and played together on Garner tunes and Geri Allen composition for their finale they joined forces on one Steinway and went piano crazy, what a scene.

It was the debut appearance for celloist/vocalist Marika Hughes New String Quartet with bassist Rashaan Carter, violinist/vocals Charles Burnham, guitarist Kyle Sanna. In her home of Manhattan, Hughes is known on the avant-garde, classical and rock scenes. For this show it was a combination of jazz, classical and folk tinged with the blues. The vocalist Buika, originally from Spain, belts out songs similar to Tina Turner but in her native language, Spanish. In Cape Town she has a serious cult following and on this Newport debut she has expanded her fan base. Her enthralling voice pulls you in despite the fact you may not understand Spanish, although she did sing Billie Holiday’s “Don’t Explain” in English. She dedicated one song to “the people who are afraid of me.” Those people include haters, those on the other end of the political spectrum and men, who disrespect women.

The alto saxophonist and composer Gary Bartz revisited his 1968 debut album “Another Earth” (Milestone) joined by one of the original band members trumpeter Charles Tolliver and featuring saxophonist Ravi Coltrane, bassist James King, guitarist Paul Bollenbeck and drummer Nasheet Waits. The group opened with the cut “Lost in the Stars” with Bartz taking on a mean solo demonstrating why he is one of the premiere saxophonists in jazz with Tolliver knocking out some wicked riffs of his own, all of the band members in their own right did not disappoint without much rehearsal time they proved to be an intuitive force but one would expect nothing less from such a distinguished cast. Surprising, this was Bartz debut performance as a leader at Newport.

Herbie Hancock’s fusion ensemble had one of the largest audiences on the festival’s main stage playing such hits as “Head Hunters,” “Thrust,” “Come Running To Me.”

The pianist also took to the stage a second day with Herbie Hancock Trio featuring bassist Christian McBride and drummer Vinnie Colaiuta. In acoustic mode, the trio ran through hits like “Dolphin Dance” and “Maiden Voyage.”

The Sun Ra Arkestra has been in effect since the early 1950s, its eclectic galactic sound infusing everything from avant-garde to the spectrum of jazz to fusion. The saxophonist, composer, arranger and Arkestra leader Marshall Allen originally joined the ensemble in 1952. Under his leadership the Arkestra is still swinging high in the galaxy. Allen at 95 has included honky-tonk blues, more soul and deep African rhythms. Seeing this eclectic star ship is more exciting than a trip to Mars. Marching through the crowd the chants, vocals and poems are all there.

Michael Mwenso, the jazz singer dressed in hip suit and tie with a nice hat is who I was used to over the last two years—he has metamorphosed into Mwenso and the Shakes. The fashionable suits and jackets are gone. “We are exploring the entire Black spectrum of music,” says Mwenso. “A lot of people take from jazz but we are the protectors, defenders and guardians of the music, we represent the music.” The vocalist feels this nine-piece ensemble is more open and plays with more freedom. “We are now open to do the music of James Brown, Bobby Womack, Duke Ellington and Louis Armstrong. We now have time to inform people on who these musicians were and why they are so important.” For this debut appearance the audience yelled for more. The jazz singer was cool but this Mwenso and the Shakes rocks with a riveting energy that invigorates the dancing soul. The band members hail from Sierra Leone, London, South Africa, Greenwich Village, Madagascar, France, Jamaica, and Hawaii, and many now call Harlem their home.

The ensemble will perform at the Jazzmobile Aug. 23, Marcus Garvey Park, 7 p.m.