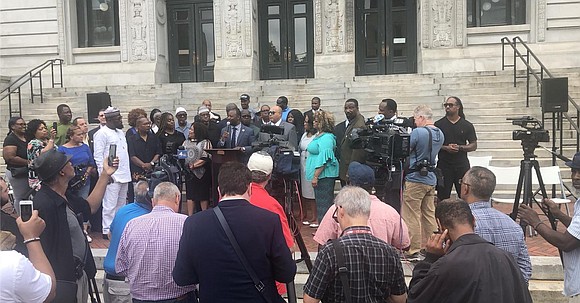 The National Action Network held a press conference in Newark with faith leaders, community activists & elected officials to support Newark’s efforts to address water filters & distribution in the wake of lead being found in the water Facebook

Activists are speaking up for Newark residents who are dealing with the city’s water crisis and demanding a swift resolution.

“Community organizations and individuals volunteered and we went door to door to distribute the filters,” said Newark Mayor Ras Baraka. “Now that we are distributing bottled water, Newarkers are again coming forward to help in getting water into the hands of their neighbors.”

Mayor Baraka announced last week that the city has partnered with the United Way of Essex and West Hudson and the Community Food Bank of New Jersey to create a water fund and to coordinate bottled water donations to support Newark residents.

“The true measure of a community is how people come together in a time of difficulty and uncertainty,” Baraka said. “The people of Newark are proving that we are strong, we are resourceful, and we are united not in hate but in love and support for one another. We will overcome any challenge that comes our way.”

Meanwhile, activists are stepping in to speak up for the residents and support Baraka. Rev. Al Sharpton’s National Action Network convened faith leaders, community activists, and social justice leaders to stand in solidarity with Baraka and city officials as they work to address residents’ concerns about the city’s water filtration systems.

Sharpton announced that he will pass out bottled water to residents on Sunday.

Assemblyman Jamel Holley reportedly sent a letter to Baraka and Gov. Phil Murphy asking them to declare the water issues in Newark a state of emergency. The designation would bring the National Guard in to distribute bottled water.

“No one’s been clear of what the plan is to fix this and that’s part of the problem,” Holley said. “At this time no resident believes what the governor or the cities are telling them because they are left with unknowns.”