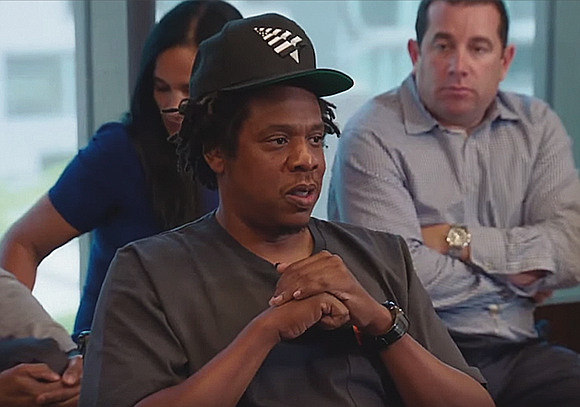 It’s been eight days since NFL commissioner Roger Goodell and Jay-Z met Wednesday, Aug. 14, at the offices of Roc Nation here in New York City to announce what instantly became a controversial and polarizing partnership.

The union will have Jay-Z leading the NFL’s entertainment ventures, including creating multiplatform content, and advising on the selection of artists that will partake in the content and perform at the league’s signature events such as the Super Bowl. He will also be significantly engaged in the NFL’s Inspire Change Initiative, which was created earlier this year to advance social justice, education, economic development and criminal justice reform across a wide landscape in this country.

The bold venture between the NFL and Jay-Z also has an underlying objective: to make Colin Kapernick disappear. In 2008 Jay-Z formed Roc Nation, which, as its website maintains, is the “world’s pre-eminent entertainment company.” Since then it has grown an impressive roster of imminently successful music artists and athletes including Rihanna and Kyrie Irving. Roc Nation has also produced profound and illuminating documentary series such as “Time: The Kalief Browder Story” and “Rest in Power: The Trayvon Martin Story.”

Shawn Corey Carter, who will turn 50 in December, in his fascinating ascent from the Marcy Houses in Bedford-Stuyvesant, Brooklyn, to becoming one of the most iconic global figures of the past three decades, has built the credibility and gravitas to be a transcendent voice of the struggles of Black people in America. But even he can’t silence the strident opposition the NFL continues to face in blackballing Kapernick.

The NFL’s newfound commitment to social and economic issues affecting urban communities was impelled by Kapernick when, in August 2016 at the start of preseason, the former San Francisco 49ers quarterback sat on his team’s bench during the ceremonial pregame presentation of the national anthem and subsequently knelt on the sidelines. His peaceful demonstrations to increase scrutiny of shootings of Black men by law enforcement officers was met with both praise and vilification. It spurred a movement that was replicated on nearly every continent by athletes and non-athletes alike that persists today.

Yet Jay-Z, in the opinion of many one the greatest lyricists in the history of the spoken word, uttered a few sentences at the seminal gathering last week with the NFL attended by select members representing television, radio, print and social media platforms that provoked negative reverberations and has countless skeptics questioning his motives.

“I think we’ve moved past kneeling. I think it’s time to go into actionable items,” said Jay-Z. “I don’t want people to stop protesting at all. Kneeling is a form of protest. I support protests across the board. We need to bring light to the issue and I think everyone knows what the issue is. We’re done with that.”

“We forget that Colin’s whole thing was to bring attention to social injustice. In that case, this is a success. This is the next phase,” he expounded. “There [are] two parts of protesting. You go outside and you protest, and then the company or the individual says, ‘I hear you. What do we do next?’”