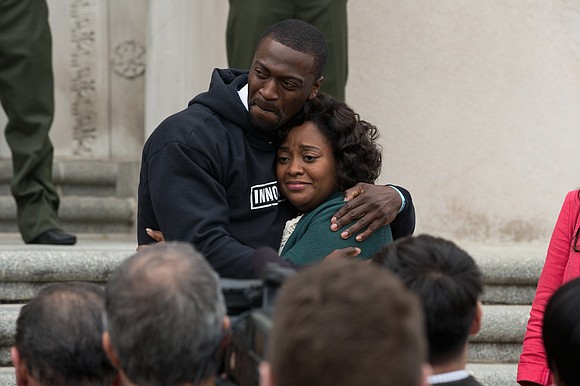 The world knows Sherri Shepherd, 52, as a very funny woman. A standup comic, she earned her spot in comedy by performing all over the U.S. before landing it big as one of the hosts on “The View.” Her credits in film and television are long with most centering firmly on building her comedy legacy and then came the role of Leomia Bank, the mother of wrongly convicted Brian Banks, in the new film “Brian Banks” and suddenly Hollywood is looking at Ms. Shepherd very differently.

Here’s the truth. Director Tom Shadyac (“Ace Ventura: Pet Detective”) was not originally looking at Shepherd to play Leomia Banks; it took some convincing for her to land the role and in many ways, it’s Shepherd’s performance that brings the much-needed balance in telling the hard parts of the truth of what really happened to Brian Banks.

“Brian Banks” is the inspirational true story of Brian Banks, an All-American high school football star who finds his life smashed when he’s wrongly convicted of a crime he didn’t commit. Despite the lack of evidence, Banks gets pushed through a broken justice system and sentenced to a decade of prison and probation. Years later, with the support of Justin Brooks and the California Innocence Project, Banks fights to reclaim his life and fulfill his dreams of playing in the NFL.

Shepherd made her name as a comedic actress in projects like “30 Rock,” and recently in “Mr. Iglesias” on Netflix. Here is an edited phone conversation with the gifted Sherri Shepherd.

AMSTERDAM NEWS: You always amaze me. You have the talent and the determination to stay in the game. I love that about you.

AMN: How did you land a role in a drama?

SS: This project came from my agents and when I read it, I connected with Leomia Banks as a mother. At the time my son was twelve years old and I said my baby could by Brian Banks. I connected with her for her faith. She had to use her faith to sustain her. I connected with the love that she has for her son despite the horrible things that were happening to him.

AMN: Did you have to work to get this part?

SS: Yes, yes I did. I asked my agent to please, please get me an audition for this role. The very thing that people love me for which is my comedic background worked against me. The movie was so heavy as a drama that they weren’t interested in seeing me for the role. They were looking at names like Viola Davis, Octavia Spencer, Jada Pinkett, Halle; it was a bunch of names [actresses] known for drama. Can you imagine? I’m a standup comic. All I knew was that in my soul I connected with Leomia Banks, I was Leomia.  It took weeks for me to finally get the audition and then I did FaceTime with the director Tom Shadyac. It was wonderful because he has directed other standup comics. He wrote the “Nutty Professor” and he’s directed Eddie Murphy in a bunch of movies. He knew how to work with stand-ups. I knew I had gotten the part when [Tom] said that I brought a softness to the role, which is what he was looking for. Then he said he had to sit on Eddie Murphy with his comedic timing and I think that I have to sit on you. He was able to take the comedy side of me and put it on the shelf with the fine china and bring up the more painful side that stand-up comics cover up with comedy.

AMN: This movie is important and it speaks to the love of a mother.

SS: Leomia, when he [Brian] was incarcerated, she drove 3 1/2 hours there and 3 1/2 hours back, the entire time he was incarcerated. She wrote him a letter every day. And that is what kept Brian Banks sane. I want parents to see that you make such a difference in your child’s life.