As successful as the Irving–Strickland league is, it’s director seeks a little more 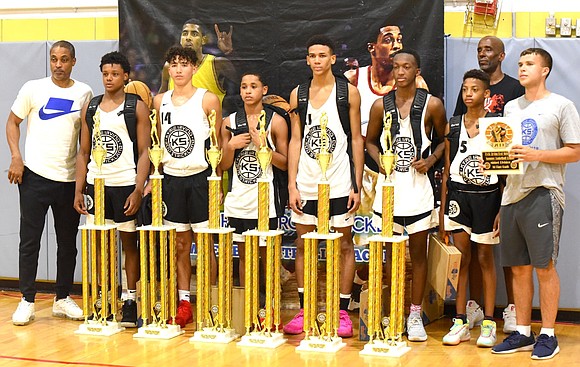 No matter how effortless it can look hosting a summer basketball league, even the best can experience, suffer through some trials and tribulations.

“It’s been good. There’s been some trials and tribulations, but honestly, I’m glad it’s over,” he said in between giving instructions on how to break down and store their equipment to the young staff members that the program employs.

What truly bothers Dyson is the lack of detail that may not match the effort that is put into servicing the student athletes that participate in the Irving–Strickland program.

“Maybe I’ll feel better about things when I return from vacation, but all in all, it’s about the kids.”

Dyson made some great points. The first championship game of the day, for the eight year olds in the Itty Biddy division, was won by the Gauchos coached by Tommie Swinton, defeating Riverside, coached by William “Wee” Francis, 37-34.

“These are the games that I like,” said Strickland. “Lots of the player’s, friends, relatives and parents there to cheer their kids on. They bring a lot of excitement to the game.

The championship, second place, MVP and Sportsmanship trophies and gift bags were given out by Strickland, a New York City basketball prodigy, NBA All-Star and college coach now working with the NBA and Drederick Irving, father of Irving, Uncle Drew, who recently signed with the Brooklyn Nets, and co-host of this summer league. Like Dyson, he’s helped build up this youth league since he’s joined on to the program that also bears his son’s name.