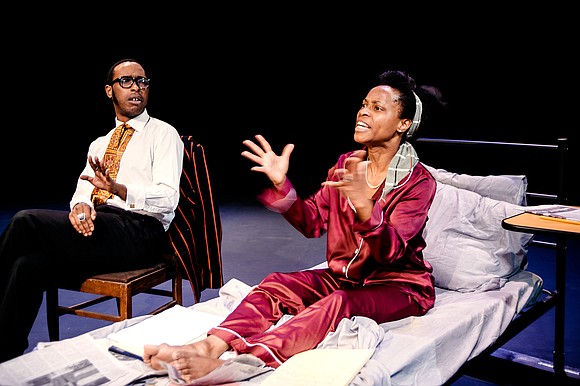 “Sweet Lorraine,” premiering as part of the inaugural RAVE Theatre Festival is a moving, compassionate production, written Adam Mace and “Little Rock” creator Rajendra Ramoon Maharaj, and also conceived and directed by Maharaj. I absolutely love the brilliance, passion and respect that Maharaj gives any project he takes on.

“Sweet Lorraine,” depicts a fictitious encounter between Lorraine Hansberry, Broadway playwright of “A Raisin In The Sun,” and her best friend and brilliant writer James Baldwin, which takes place in her hospital room a week before she passes away from pancreatic cancer.

The conversations between these two are mesmerizing and show the frustration and determination of Hansberry, even when she is bravely fighting cancer and knowing that this hospital room will be where she ends her life. You hear the marvelous, erudite banter between these two friends while they also express the frustration of being unfairly treated in the United States. Hansberry is frustrated to know that while she was able to let people know the true plight of Blacks through “A Raisin In The Sun,” she will not be able to finish her work and continue to bing attention to the issues of Blacks in this country. Hansberry bought Black people to the theater, because she told our truths. She resented the “Uncle Tom types” she felt bought down the race. However, Baldwin doesn’t agree with that, feeling they did what they had to do at the time to survive. They are the ancestors.

The play also looks at the unjust treatment Baldwin received for being a Gay, Black man. He was also someone who had endured a rough childhood, being raised by a stepfather who was a pastor and considered him an abomination, and who brutally attacked him and called him fagot.

It was very interesting learning about the struggles both literary giants faced. It was also interesting to hear the explanation for why Baldwin waited months before going to visit Hansberry in the hospital. Fear: he was afraid he wouldn’t find his “Sweet Lorraine” in the hospital, he’d find someone who was so changed that he wouldn’t recognize her.

Valisia LeKae is absolutely captivating as Lorraine Hansberry. Moving as if in a great deal of pain, but still trying to fight on, LeKae touches the heart with her stunning performance. LeKae’s performance is definitely informed by her true-life experiences since she is a recent ovarian cancer survivor. The way she moves in the hospital, the pain she appears to be in seem more real, then acting can accomplish, her pain is definitely the work of someone who truly knows the all-consuming pain that cancer can cause. God bless LeKae and I’m so glad she chose to do a role that was so close to heart. It shows! Christopher Augustin is marvelous as James Baldwin. He has a charm, vulnerability, compassion and a resilience. The two actors have a fantastic energy on stage. They just have a chemistry that clicks, where you felt like you were really watching to old, educated, friends trying to make conversation in the hospital to have laughs and revisit the past for happy memories.

“Sweet Lorraine” is sweetly stunning! The intimate drama is presented by Rebel Theater Company in association with NAACP Brooklyn Branch Equity in the Arts and Culture Committee and RAVE Theater Festival. The show is being performed at Teatre LaTea at 107 Suffolk Street, the next and final show will happen Saturday, Aug. 24, at 12:45pm. The RAVE Theatre Festival will end Aug. 25. Tickets are available at www.SweetLorraineThePlay.com and thirty (30) minutes before the performance at the Teatro LaTea box office.