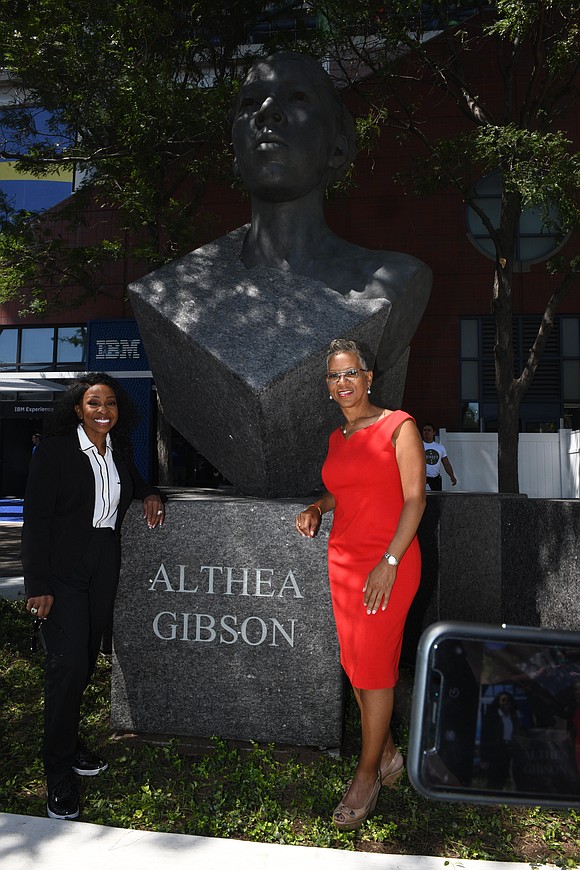 Singer Gladys Knight and Katrin Adams, the first African American President and CEO of the USTA in front of the Althea Gibson statue Margot Jordan

A statue of this iconic woman was unveiled in front of Arthur Ashe Stadium on the grounds of the Billie Jean King Tennis Center in Flushing Meadows, Queens to commemorate Gibson’s historic achievements.

In 1956, Gibson broke one of sports’ major color barriers by becoming the first African American to win a Grand Slam title, the French Championships. The following year, she won both Wimbledon and the U.S. Nationals, now the U.S. Open, then winning both again in 1958.

Gibson was voted Female Athlete of the Year by The Associated Press in 1957 and in 1958. She was also the first African American to receive that title.

Gibson, who died in 2003 at the age of 76, won a total of 11 Grand Slam tournaments in all, five singles titles, five doubles and one mixed doubles title. Remarkably, Gibson won three consecutive Wimbledon doubles titles; 1956, 1957 and 1958.

“I think it’s really important for people to know about Althea Gibson, not only who she is, but what she represented to all of us,” said King, another tennis great who the center is named after.

“I’m so happy to see this. It’s so long overdue. This statue recognizes the accomplishments of a great African American woman,” said Wanda Durant, mother of allstar ballplayer Kevin Durant, one of the many fans on hand to view Monday’s 11 a.m. USTA presentation.

“I can’t begin to imagine what she had to endure,” said Jan Adams who traveled from Washington, D.C. to be here. Adams is president and CEO of a government consulting firm based in Washington, D.C. that provides program management support to the Federal Aviation Administration. Adams has a staff of 100-plus employees that include former air traffic controllers, system engineers and budget analysts.

“I’ve always been inspired by her. She had to be an amazing Black woman.” King described what Gibson had to endure in two words, sexism and racism.