‘Brittany Runs a Marathon’—a woman runs toward a better life 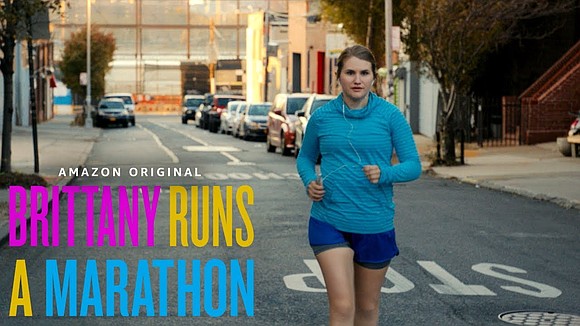 “Brittany Runs a Marathon” is the debut feature by playwright Paul Downs Colaizzo and is drawn from the life of his best friend, Brittany, an overweight New York woman who decided to change her life—and not just to have a pleasing figure or to improve her health. Brittany’s change included how she views herself and other people and it’s wonderfully motivational.

Along with the encouraging spirit that runs through the film, it’s also very smart and very, very funny. Despite the absence of marquee stars, this indie film is a winner in every way and should provide a career shine-up for all significant participants.

Brittany (Jillian Bell) is a 28-year-old Manhattanite who seems to be living the dream of enjoying life in the big city. She works at a job at an Off-Broadway theater, then parties (hard) with her roommate, Gretchen (Alice Lee), who dreams of becoming an Instagram star. After a visit to the doctor, Brittany receives bad news about her blood pressure, which is all wrong for her age. Her doctor makes it clear that she needs to drop up to 55 pounds, and that’s just for a start.

Gym membership is too expensive so she starts jogging, but even a single city block proves a challenge. Nonetheless, she keeps going, getting encouragement from an uber-thin fellow tenant (Michaela Watkins), and gaining a new friend from another running-group newbie (Micah Stock) who despises exercise as much as she does.

The three decide to run a 5K, then start dreaming the impossible dream: running the 26-mile New York City Marathon. The latter decision requires serious training and, to make it happen, she finds a side job housesitting for absent pet owners. Her first gig brings her an encounter with the nighttime dog walker Jern (Utkarsh Ambudkar), who illegally moved into the owners’ residence.

The hard work pays off and the pounds begin to fall away. Brittany even tries dating. But before the complete transformation, she has to master her pattern of self-sabotage. In a very revealing scene, a very drunk Brittany belittles a stranger more overweight than she ever was, to the disappointment of her sister (Kate Arrington) and brother-in-law (Lil Rel Howery).

Well-written and directed, the film transforms itself into something deeper than a feel-good, underdog story. Here we watch Brittany change her life, which includes running at the real-life NYC Marathon, and the result is deeply moving.