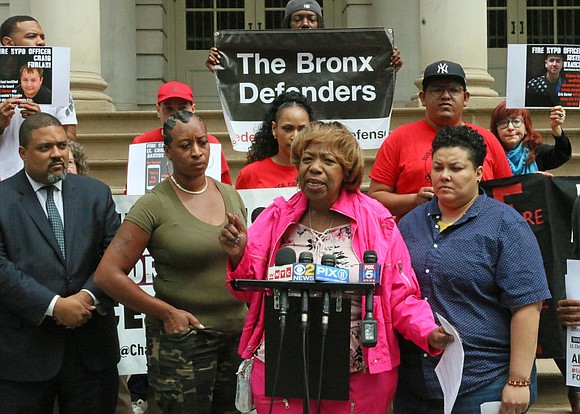 The family of Eric Garner told folks that they wouldn’t stop. Looks like they meant it.

At this point, as the Garner team awaits a response from the CCRB and the NYPD, Alvin Bragg told the Amsterdam News, “It is Gwen Carr versus de Blasio.”

Bragg, the co-director of the New York Law School Racial Justice Project, a visiting professor of law at New York Law School, and the former chief deputy for the New York State Attorney General determined, “Justice requires transparency. There is no legitimate law enforcement reason why—five years later—Mr. Garner’s family, criminal justice advocates and the public do not have the fundamentally important information we seek today.”

“I want to tell Mayor Bill de Blasio to take action with those other police officers who covered up the murder of my son—who actually lied on official reports,” Gwen Carr said on the steps of City Hall with two of her grandsons at the end of a news conference. She told the Amsterdam News, “As a parent—to a parent—I would tell him my son is just as important as anyone else’s son. I am sure if that was any of those officers’ sons lying on the ground and yelling ‘I can’t breathe,’ it would not be the same situation as my son while he lay dying and everyone looked the other way.”

Just a week after the firing of officer Daniel Panteleo, who was seen in the 2014 video holding a dying Eric Garner in an illegal chokehold as he said “I can’t breathe” 11 times, Carr told the paper that as for the mayor, “I want him to move forward with their accountability and discipline.”

On July 17, 2014, NYPD officers were captured on video arresting Garner on Staten Island, as some witnesses say he was breaking up a fight—but the NYPD claim he was selling untaxed cigarettes. Pantaleo’s chokehold, while Garner’s said “I can’t breathe,” lead to his death. Officer William Meems told the Civilian Complaint Review Board that he thought Garner was faking being unconscious. Damico said that he thought Garner was “playing possum.”

On Tuesday in front of City Hall, the family, along with Communities United for Police Reform, a variety of activist grassroots concerns, and the New York Law School Racial Justice Project, demanded that the New York Police Department fire Officer Justin Damico and others who were involved in the death of Garner. They also want the NYPD and Mayor Bill de Blasio’s administration held accountable for their alleged failure in the process.

Supporting the records access demand letter and FOIL request attorney Gideon Oliver warned as an electioneering Mayor Bill de Blasio keeps “invoking Eric Garner’s name as part of his presidential ambitions—what we are demanding is a full and complete response from the police department and the CCRB. And Mayor de Blasio should keep Eric Garner’s name out of his mouth—unless and until those agencies under his control give us full and complete responses, and we will be pressing forward until that happens through every available means that we have.”

While Pantaleo and Adonis have been disciplined, Garner’s family also wants disciplinary chargers brought up against Lt. Christopher Bannon and Officers Mark Ramos and Craig Furlani. They also want all three, along with Damico, fired.

Communities United For Police Reform member Mark Winston Griffith said, the court petition filed in Manhattan Supreme Court is “a request [is for] a judicial inquiry into neglect and violations of duty by de Blasio, Commissioner O’Neill, Deputy Commissioner Kevin Richardson and others related to the killing of Eric Garner, and the failure of the de Blasio administration to take appropriate actions, including failure to discipline all officers who engaged in misconduct in a meaningful or timely way.”

Griffith, executive director of Brooklyn Movement Center, and one of several petitioners added, “What we witnessed was an obstruction of justice from the top of the law enforcement food chain down to the very bottom. If a civilian had done what some of these officers did, they would have been brought up on criminal charges.... But let’s not allow Daniel Pantaleo’s firing to distract us from asking the questions: what about the corruption that was unleashed when Eric Garner died that day? Who exactly are the mayor and police commissioner protecting and serving when a poisonous system of petty cover-ups and big lies is the order of the day.”

Attorneys Oliver, Bragg and Anthony Posada from Legal Aid demanded a thorough response, but noted the usual history of stonewalling, inadequate answers and the withholding of records. Bragg told the Amsterdam News, “Mayor de Blasio wants to close the door on investigations relating to the stop, arrest and killing of Eric Garner.  But, five years later, the Garner family and the public still have been denied basic transparency.  Questions abound about the medical treatment of Mr. Garner, the leaking of confidential information relating to Mr. Garner, and false statements made by police officers in connection with the investigation of Mr. Garner’s death. This is unacceptable. As the former statewide special prosecutor for investigations of deadly use of police force against unarmed persons, I know from experience that there is absolutely no legitimate law enforcement purpose for the city’s lack of transparency. In Gwen Carr v. Bill De Blasio, we seek and are confident we will get what the city has failed to deliver: a transparent, thorough, independent investigation of all the officers involved in Mr. Garner’s death.”

“For the last five years, Mayor Bill de Blasio and the NYPD have avoided any true measure of transparency relative to the investigation into Eric Garner’s killing, and most recently, Officer Daniel Pantaleo’s administrative trial,” added Legal Aid Society’s Criminal Defense Practice Attorney-In-Charge Tina Luongo. “It’s sincerely unfortunate that we have to litigate for basic transparency and answers but we are ready to do so on behalf of the Garner family and those communities historically plagued by police brutality.”

De Blasio’s felt the brunt of the aftermath of Pantaleo’s firing. During a recent town hall broadcast on CNN, a heckler interrupted the broadcast asking why the mayor and presidential candidate waited more than five years for any officer to lose their job. On NY1’s “Inside City Hall” program, the mayor told Errol Louis that the city’s done the best they could with the available power it has.

“The most central figure in this case, Officer Pantaleo, obviously was terminated by the NYPD’s own process, not by any other part of the justice system, by the NYPD,” said de Blasio. “The two officers that, because of statute of limitations still could be acted on by the NYPD, were Pantaleo and Adonis, both those cases concluded now, and that’s it. The fact is the opportunity for other things to be considered was back at the beginning of the process and was affected by the actions of the prosecutors, both the DA and the Justice Department. We’ve got to come to grips with that going forward and I think there’s two things—or three things that could be done.”

Loyda Colon, petitioner and co-director of the Justice Committee, said whatever the NYPD did in the dark needs to come to light.

“From day one, the NYPD and Mayor de Blasio have done everything in their power to hide the facts of the case and shield the officers responsible for Garner’s death,” stated Colon. “It’s outrageous that—in a city whose mayor consistently attempts to brag about his ‘successes’ in strengthening police-community relations—Mrs. Carr has to resort to legal filings in order to gain transparency about her son’s murder.”

Neither the mayor nor the NYPD responded to Amsterdam News requests for comments on the new suit.

“After more than five years, we know the de Blasio administration’s investigations of officer misconduct related to Eric’s murder have not been timely or transparent,” stated Ellisha Flagg Garner, Eric Garner’s sister. “After all of the games they have played for more than half a decade, we have no faith that they have really been diligent in investigating officer misconduct like the false statements and lying of Officer Justin Damico.

“This is not just for Eric; we’re doing this for all New Yorkers whose loved ones have been killed or brutalized by the NYPD and whose names are not as well-known as Eric’s because if the city gets away with sweeping this under the rug, what chance do others have to hold officers accountable for wrongdoing?”

The family’s demanding a judicial inquiry into various violations involving force used against Eric Garner, failure to train officers on appropriate use of force and prohibition of chokeholds, falsifying NYPD documents relating to the incident and unlawfully leaking of Garner’s arrest and medical history.

“It’s not over until these officers stand accountable for their action that day.”