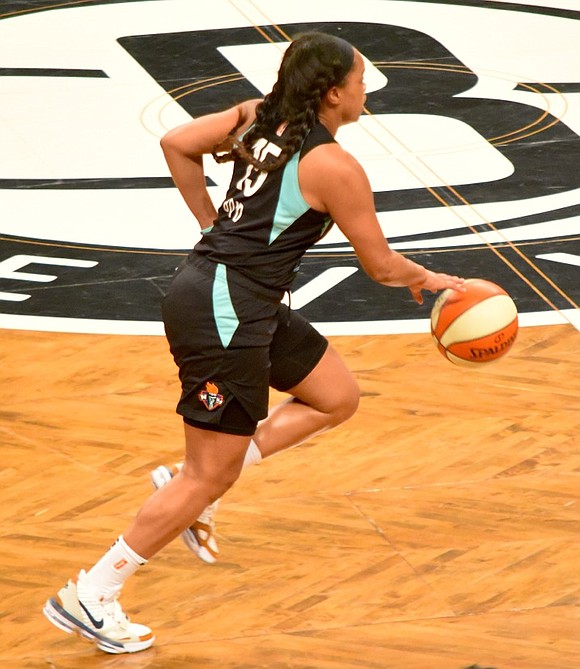 Tuesday night’s 95–82 loss to the Phoenix Mercury put an end to the New York Liberty’s hopes of making a late season playoff push. The final four games of regular season play are about pride and setting the team up for 2020.

“It’s similar to the whole season; we compete but not consistent enough on the execution of the game plan—both defensively and offensively with knocking down shots,” said Liberty head coach Katie Smith. “The consistency of playing well and disciplined for longer periods of time. We have these little gaps and they jump on to a little bit of a lead.”

Seven WNBA teams have earned spots in the playoffs: the Washington Mystics, Connecticut Sun, Los Angeles Sparks, Chicago Sky, Las Vegas Aces, Seattle Storm and Minnesota Lynx. The last spot will likely go to the Phoenix Mercury. Knowing the fight for playoffs was tight, the Mercury came into the game with the Liberty intent to make a statement. Beset by injuries all season, the Mercury finally has a full, healthy team and Brittney Griner and company looked sharp. Former Liberty guard Leilani Mitchell had a tremendous night offensively with 29 points.

Last Friday, the Liberty suffered a 90–87 home court loss to the Atlanta Dream, the team with the worst record in the league, which had already been knocked out of playoff contention. Following the game, Dream player Britney Sykes said, “We may be out of the playoffs, but that doesn’t dictate the rest of the season.” That must be the Liberty’s attitude for its final four games of 2019.

A win over the Indiana Fever last week kept the Liberty’s playoff hopes alive, but after that there were three losses. The first was a home court defeat to the Dream. Then the Liberty suffered a brutal 101–72 loss to the league leading Mystics, which played without Kristi Toliver, currently out with an injury. Sadly, the home court loss to the Mercury sealed the Liberty’s fate.

“All we got is each other, whether we are on the bench or on the floor,” said Liberty center Amanda Zahui B. “That is the only way we are going to be sane and win games in the near future.”

The Liberty takes on the Connecticut Sun Friday evening at the Westchester County Center.