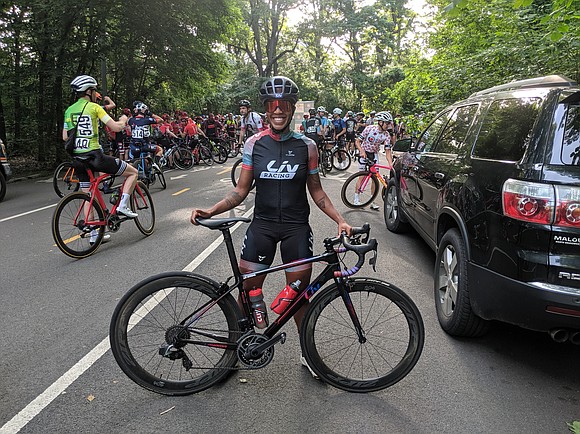 Last week’s Colorado Classic presented by VF Corporation was cyclist Ayesha McGowan’s first time competing at altitude. It was a tough four days, but she managed to finish the women’s-only race in which she faced some of the top women road cyclists in the world.

“It was definitely a challenge. I didn’t completely feel like myself ever,” said McGowan, 32. “Overall, I felt it was a really great experience. I’d definitely do it again.”

As McGowan chronicles on her website AQuickBrownFox.com, she is intent on being the first African American professional woman cyclist. Born in Georgia and raised in New Jersey, McGowan always enjoyed cycling, but found her passion for racing while living in New York City where there’s a pretty active bike racing scene.

“There are races in the parks,” she said. “It’s not necessarily the most adventurous courses, but it’s still there and consistent and really fun. There’s also the track in Kissena Velodrome (Queens), which is where I started. It’s kind of challenging to get to, but it’s so much fun. They have track clinics. There are a lot of ways to get into bike racing in NYC.”

Previously, a preschool music teacher in Brooklyn, over time McGowan has become a sponsored athlete and advocate. She does speaking engagements and writes about her vision for seeing more diverse representation in the sport of cycling. At present, home base is Decatur, Georgia.

McGowan competes when and where she can, mostly in the U.S., some stage races and some road races. “This year I’ve raced about 50 race days,” she said. “Right now, I’m probably at the highest fitness that I’ve ever been.”

Colorado Classic was her last official race of the year, but McGowan expects there will be a couple of relaxed races and charity events in the fall as part of her advocacy and presentation for people of color. In her speaking engagements, she tries to speak less about herself and more about why representation for people of color in cycling is important. She gives suggestions on how the industry could do better.

“People from everywhere ride bikes, but we don’t see that represented in the industry,” McGowan said. “Representation is essential for creating a new generation of bike riders and bike racers and promoting what I think is an incredibly fun lifestyle.

“I really enjoy advocating for people of color and continuously reminding the industry that we are here and we deserve to be part of cycling,” she added. “It’s been really awesome to keep pushing boundaries, getting into big races and succeeding.”