Serena begins her quest for a 24th Grand Slam at the U.S. Open 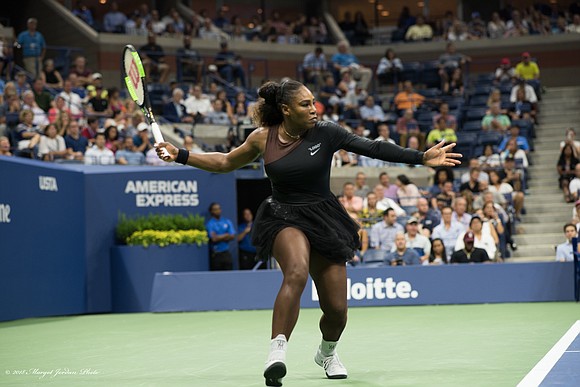 Court amassed her titles from 1960 to 1973, eight years before the start of the Open Era in tennis, making Williams first all-time in singles majors wins in the Open Era, which began in 1968 when the major tournaments began to allow professionals to compete against amateurs.

Day One of the 2019 Open began with the unveiling of a statue to honor pioneering tennis great Althea Gibson, the first African American to win a Grand Slam title, when she captured the French Open in 1956. Gibson won a total of six major championships, including back-to-back U.S. Opens in 1957 and 1958, the years she also won consecutive titles at Wimbledon.

The evening ceremony began with Billie Jean King introducing the new president of the USTA, Patrick Galbraith, followed by a performance by Tony Award winner Ben Platt, star of the Broadway play “Dear Evan Hansen.” Celebrities in attendance included Mike Tyson, Robin Roberts and Katie Couric. After losing in last year’s U.S. Open final to Naomi Osaka, the 37-year-old Williams, the No.8 seed in this tournament who earned her first U.S. Open singles title in 1999, started this year’s journey with a vengeance, dominating five-time Grand Slam champion Maria Sharapova 6-1, 6-1 in less than one hour. She is now 20-2 head-to-head against Sharapova.

“I just feel like her game really matches up well against mine,” Williams said of Sharapova after her victory. “I always said her ball somehow lands in my zone.” When asked about the ceremony celebrating Gibson, Williams expounded on Gibson’s cultural and social significance.

“I think it sends a great message to me in particular, knowing her story, knowing Althea, what she went through,” she said. “Being truly the first pioneer, an African American in tennis, just to a sport that wasn’t open to Black people.” Gibson, a native of Clarendon County, South Carolina, passed away in 2003 at the age of 76 in East Orange, New Jersey.

Williams took on fellow American Caty McNally last night (Wednesday) at Arthur Ashe Stadium in the second round. In other first round matches, her older sister, Venus William, advanced to the second round with a win over SaiSai Zheng, 6-1,6-0. It was her 22nd first round match at the U.S. Open without a loss. Fifteen-year-old American CoCo Gauff, who burst onto the majors scene at Wimbledon earlier this summer, rallied to defeat 18-year-old Anastasia Potapova of Russia, 3-6, 6-2, 6-4.

“I think I gave my parents a heart attack, especially my mom,” Gauff said afterward. “My dad, he looks a little bit tired over there too.”

The tournament’s No.1 seed, defending champion Osaka, as well as No. 10 seed Madison Keys also won their first round matches.