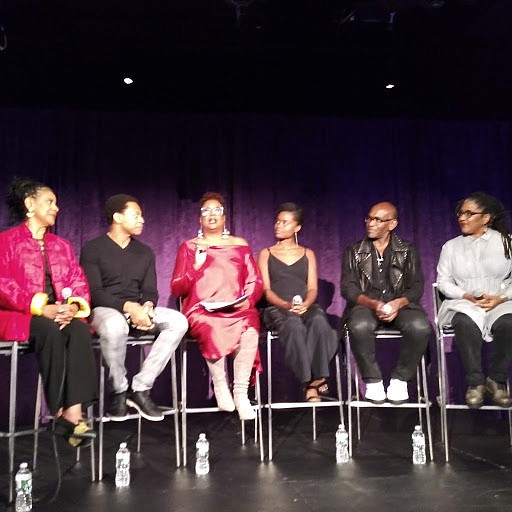 The Broadway League recently held a spectacular event at the National Geographic Center to inspire African American engagement, awareness and access. It was a welcomed event and wonderful to have Broadway seek out African Americans to get them to come to Broadway shows. The event, called “Let’s Do Broadway” was held in midtown. Jelani Alladin, star of Broadway’s “Frozen” and the first Black Kristoff (and the originator of the role), a phenomenal master of ceremonies.

“‘Let’s Do Broadway’ was created by the Broadway League to inspire more involvement by the African American community. The League brought on Harriett Cole as a guide to developing initiatives, not only as tonight’s moderator, but for the League’s entire effort working towards the League’s important goal of our inclusion on Broadway,” Alladin explained.

Alladin was the perfect person to be master of ceremonies, not just for his role as Kristoff, but also because he was recently the first African American to play Hercules at The Public Theatre. “I did both shows for the same boss, which is Disney and is known for being very inclusive in their casting. It was particularly amazing for me because I got to stand in the shoes of a leading man twice in an iconic musical, where the public has come to know these characters as white and they can be anything. And so getting to stand in that place was a huge honor for me. I felt ownership of that. With what America is going through right now, I needed to stand for the fact that a hero can be a Black man…I’m looking for the day when we go to see a Broadway show and there isn’t just one token Black dude playing one of the principles. That it’s a wash of all the people, all the characters and looking and reflecting the world we live in today,” Alladin remarked.

Alladin introduced Charlotte St. Martin, the president of the Broadway League. “We at the Broadway League are so excited about ‘Let’s Do Broadway.’ Our goal is to make Broadway more accessible for everyone. We have many programs that address accessibility and getting our shows and our business to look like our country. One of the programs I’m very excited about is our Broadway Bridges, we just launched about two and a half years ago. Our goal is to have every high school student in the New York City school system see a Broadway show before they graduate. This year we’re doing over 20,000 students and we’re working up to doing 70,000 students. That’s to have the audience look more like them. On stage, backstage and in our offices we give a number of programs including our high school internships. They get people of color into internship in a company manager role, which is one of the most important roles and we also have many other programs including viaBroadway. We are developing many new opportunities to introduce the best of Broadway to everybody in this country. Several years ago a very important person in this room, reached out to me and said, why don’t we make Broadway more reachable and Stephen Byrd is that man. He agreed to serve as chair of our Multicultural Task Force and this event is one of the things that came out of that.”

St. Martin introduced Multicultural Task Force co-chairs, Stephen C. Byrd who produced “Cat on a Hot Tin Roof” and “A Streetcar Named Desire,” both with all Black casts and Aaliytha Stevens, a lead person of color on the agency side of Broadway.

Byrd shared, “The focus of our taskforce is to examine and engage the African American community and Broadway, so we’ve got a big ‘you are welcome’ sign hanging out. I came to Broadway 15 years ago with my producing partner Alia Jones, we came as lead producers. We are currently working on ‘Ain’t Too Proud,’ which we are proud of. One of our programs is our ‘Broadway Story,’ where we had young people speaking about Broadway and the importance of our representation on Broadway.” Byrd thanked the partners that assisted with today, “Frozen,” “Aladdin,” “The Lion King,” “Tina: The Tina Turner Musical,” “MJ the Musical; “Ain’t Too Proud: The Life and Times of The Temptations” and the Roundabout Theatre Company.

Aaliytha Stevens from Spotco ad agency stated, “We want this event to kick off an on-going dialog and value any and all feedback. Stevens acknowledged the restaurants that provided delicious food samples for the event, which included B Squared, Field Trip, HH Bespoke Spirts, Le Gourmand NYC, LeeLee’s Bakery, Melba’s, Ruby’s Vintage and Settepani. Guests had the chance to eat pastries, shrimp, chicken, and so many other delectable dishes. She then introduced a video with samples from Broadway shows, put together by Playbill.

Harriette Cole, a best-selling author, editor, motivational speaker and presentation coach was the evening’s moderator. The panel consisted of Derrick Baskin who plays Otis Wilson in “Ain’t Too Proud,” Denee Benton who plays Eliza Hamilton in “Hamilton,” Tony Award winning actress Phylicia Rashad, who will be making her directing debut with Charles Randolph-Wright’s “Blue,” Pulitzer Prize winning playwright Lynn Nottage—“Ruined,” “By The Way, Meet Vera Stark,” “Sweat” and wrote the upcoming “MJ the Musical” about Michael Jackson’s life––and costume designer for 25 years, Paul Tazewell for “Hamilton,” “Bring In Da Noise/Bring In Da Funk” and many others.

Cole said speaking to Black people she found out, “We want more stories about us. More direct appeal to us, more of us behind the scenes and sometimes a little discounted ticket. We want a more direct connection to us to get folks to come to Broadway. In the last couple of years there’s been a bigger engagement to get African American audiences to come to Broadway.” She talked about how instrumental the Black church in bringing Black people to the theatre. She recalled how her 89-year-old mother would get together with her friends from Baltimore and come up to New York to see a Broadway show. “We want you to share with people how dynamic Broadway is right now…I’ve seen color-blind casting right now.”

Phylicia Rashad talked about the first Broadway performance she did as an understudy in “Ain’t Supposed To Die A Natural Death,” in which she covered four roles. “It was amazing.” She talked about how the show was based on improvisation. She shared the marvelous experience of working on an August Wilson play. “He would sit there with his eyes closed and it looked like he was sleeping. When his eyes were open he was doodling. Then he would come back the next day and four pages of dialogue would be reduced to a phrase. He was masterful.” Rashad who has directed plays and is getting ready to make her Broadway directorial debut talked about the process of the director, “to tell the story…to conceive a vision and align that vision with the creative energies of those around her.”

Derrick Baskin talked about what he had to do to prepare to be Otis Williams, not a fictional character, but a real person with a history and songs that are well known to generations. “I had to open myself up to the experience. I met him very early on and I connected with him as a Black man. Doing this became a thank you to him, because I stand on the shoulders of other Black men. So every night I get to say thank you to him,” Baskin shared. Baskin spoke about the challenge of mastering the Tony Award winning dance choreography. “I’m proud of originating this role because that means I’m part of theatre history,” Baskin remarked.

Denee Benton who plays Eliza Hamilton in “Hamilton” talked about being Black and playing a white woman. She felt that Lin Manuel Miranda felt the connection that people of color bring to the role, “I felt I could do it.” She had also played Natasha in the “Great Comet of 1812” on Broadway and she loved it and the fact that her being in the role inspired other Black young women. Paul Tazewell, the impeccable costume designer for over 20 years, talked about his process in costume design for “Hamilton” and so many others. “It is always different. What’s different is that it starts with the director and the idea that the director has. And the story that we all have to tell. After reading it multiple times I go to images and find images that I respond to that go with telling the story. There are some things that are specific and some that are abstract. Then I arrive at some way of telling the story that I think will be most effective. With ‘Hamilton’ the quality of the music, the sound, the colors of everyone in the cast, you want to hold to a world that we all believe in.” His Broadway production was “Bring In Da Noise; Bring in Da Funk” with George C. Wolfe and it went from there.

Lynn Nottage, the extraordinary playwright, talked about what motivates her to write. “‘Intimate Apparel’ came from the death of my mother, I had been very depressed, and I wanted to write something that she would want to see. ‘Sweat’ came from all the bad things that were happening in the world and how the politicians don’t care about people… My process evolved when I had children. I could only write between 9 a.m.-2 p.m. and when I did I had to hyper-focus.”

Nottage is the writer behind the upcoming Broadway musical “MJ The Musical.” She said what interested her the most about Michael Jackson was his process. “He was a genius. He was very intentional when he listened to music. He studied classical music, Bob Fosse and so many kinds of music,” Nottage said. “Hadestown” cast members came forward and thrilled the audience performing a delightful song from the show.

“Let’s Do Broadway” was a powerful, empowering and inspiring event and I truly encourage everyone to go and see our people in Broadway shows, there are so many phenomenal productions out there and realize that at Broadway, you are very welcome!