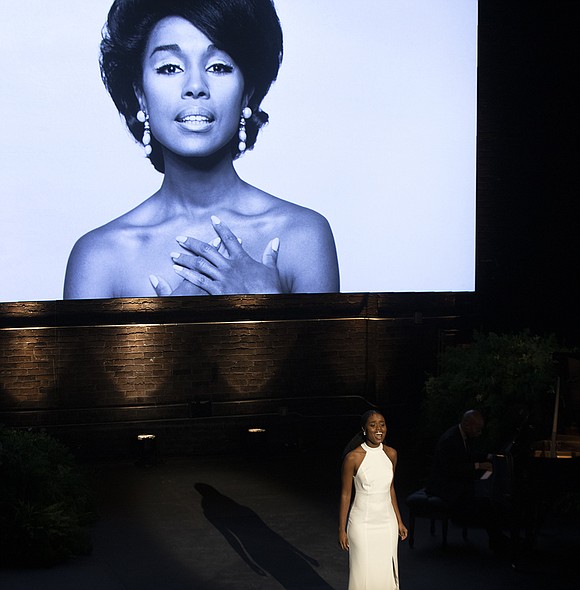 “The Celebration of Life for Diahann Carroll Pays Tribute To A Trailblazing Icon and Activist” at Broadway’s Helen Hayes Theater began with Tony Award-nominated Denee Benton singing “A Sleepin’ Bee” with a bell-like clarity Carroll must have had when made her critically-acclaimed debut in the legendary musical “House of Flower” in 1954.

The star-studded tribute ended with a gospel choir singing “You Lift Me Up” from the balcony after Dianne Reeves’ soul-stirring rendition of Paul McCartney’s “Black Bird,” which Carroll’s daughter, Suzanne Kay, said her mother specifically requested be sung at the memorial service. Noting that “bird” was English slang for “woman” Kay explained that the Paul McCartney tune was penned during the 1960s Civil Rights Era as a tribute to Black women’s strength and resilience..

Carrol’s strength and beauty were just two of the qualities highlighted from her daughter’s opening welcome to the choir’s final notes rising to the rafters. Like a multi-faceted diamond they sparkled through the life of this exceptionally gifted singer, actress, activist, loving mother, grandmother, aunt, friend and mentor. Her dazzling beauty was captured in larger-than-life photos projected onto the back wall of the dimly lit stge. Her invincible spirit, joie de vivre, sardonic wit, fierce loyalty and more were captured in the anecdotes, by turns touching and hilarious, shared by family and friends of the woman her daughter described as “fabulous, fascinating, and complicated.”

Poems, like the one Lynn Whitfield opened with, by Lucille Clifton, captured a life built more on laughter than tears. Friend Amy Greene contributed a poem she and Carroll agreed the survivor would read at the other’s funeral. It was W.H. Auden’s “Funeral Blues,” a poignant portrait of grief: “Stars are not wanted now: put out every one/ Pack up the moon and dismantle the sun/ Pour away the ocean and sweep up the wood/ For nothing now can ever come to any good.” Actress Angela Bassett read of Maya Angelou’s powerful poem “When Great Trees Fall” as Harlem School of the Arts violinist Majid Khaliq played. How apropos.

Diahann Carroll was one of the few Blacks, back in the day, who forcing the white gaze to see Black women in living color. Born and bred in NYC, her budding talent was evident when as early as 6-years-old she sang in the Abyssinian Baptist Church children’s choir. It blossomed at Manhattan’s High School of Music and Art and in 1950s TV talent shows. Then, after appeasing her parents with a brief stint at New York University, she exploded. Highlights of her stellar career include appearing in the all-black motion picture “Carmen Jones,” starring Dorothy Dandridge and Harry Belafonte and chock-full of budding talent, like dancers Alvin Ailey, Carmen de Lavallade and James Truitte. In 1962, Carroll won a Tony Award for “No Strings,“ a Richard Rodgers’ musical written with her in mind. In 1968, she broke the color-barrier and TV ratings record playing a widowed nurse and single-mother in the Emmy nominated, Golden Globe winning NBC sitcom, “Julia.”

Of course, the clear-eyed Carroll joined critics bemoaning the entertinment industry’s failure to make characters played by Black actors less homogenized and more substantial telling one interviewer, “At the moment, we’re presenting the white Negro and he has very little Negro-ness.” Carroll fought to add more than one dimension to her characters in works ranging from in Alex Haley’s epic cultural identity quest, “Roots: The Next Generations” (1979) to the peon to glitz and glam AlBC’s sitcom, “Dynasty,” where as the elegant Dominique Devereaux she traded quips, barbs and slaps with well-heeled adversaries.

Capturing the essence of this multifaceted woman lofty laments shared the stage with down-to-earth anecdotes that spoke of a woman who projected indominatable dignity at a time when the entertainment industry often saw Black women as mammies, maids, prostitutes, junkies, or tragic mulattoes. Dionne Warwick said it was this Carroll who, in full-glam mode, gently reprimanded her for grocery shopping in L A without makeup. It was this Carrol that Lenny Kravitz called “Aunt D” and Carmen de Lavallade recalled with a series of vivid mental snapshots. And, It was this Carroll Producer Susann Fales-Hill, said was her mother, actress, dancer, singer Josephine Premice’s BFF while sharing stories of the magical “aunt” with no time for tears, hers or anyone else’s, but would quickly console her teenage angst with a Neiman Marcus shopping spree. Fales-Hill also called her a role model for self-esteem. “After all, who else do you know who snubbed Marlon Brando and John F. Kennedy and when asked if she thought she had platinum between her legs, quickly replied, “Yes.”

Capturing Carroll’s wry sense of humor, Laurence Fishburne, recalled her devotion to BFF actor Roscoe Lee Bowne who, before he died “gifted me to Diahann telling me to take good care of her.’ The two were so close they spoke every day. Death didn’t change that, Fishburn said. Carroll kept Browne picture in her bathroom so she could talk to him daily, telling Fishburne with a wry smile sometimes she wished he’d shut up.” Seems Brown said things like, “I can’t imagine why everyone mistakes me for Diahann Carroll,” or “Oh, Diahann, put some clothes on.” Carroll was also adept at throwing shade before it became a thing, Fishburn said recalling a cab ride with Carroll, Browne, and Miles Davis when “ Davis, let loose God knows how many motherfuckers.” After a few minutes, the sedate Carroll blurted out, “Miles, please!!! Not everyone is as sophisticated as you.”

The magnificent Cecily Tyson rounded out the evening with memories of a lifelong friendship that began with a meeting the opening night of her Broadway triumph in “No Strings.” Then, she shared a poem saying Carroll must have wanted her to read since it kept coming to mind as she prepared for the tribute: “Do not stand by my grave and cry because I am not there/ I am in the wind, the waves, the sunrise/ I am in every lovely thing/I did not die.”

In death as in life, Diahann Carroll is a role model, Fales-Hill said fighting back tears as she urgently delivered a message to all, but especially to young, gifted and talented women of color: “Diahann Carroll changed the status quo forever for women of color. She was the future and it began then.” Throughout the entire tribute, it was obvious this was not about coming away with tear-stained cheeks and crumpled Kleenex but with the knowledge that because women like Diahann Carroll existed, ‘We can be and be better.”